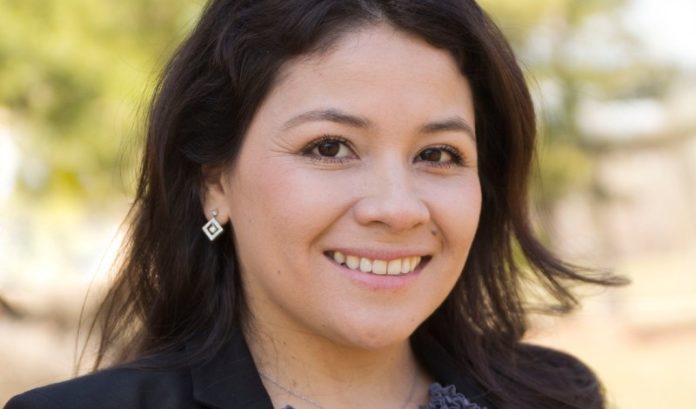 Katerin Traugh was named the executive director at Scarinci Hollenbeck last week. In traditional times, the role is similar to serving as chief financial officer or even chief operating officer of a large company. Of course, these aren’t ordinary times.

In addition to the oversight of financial issues, Traugh has helped the Lyndhurst-based firm transition to remote work — something made easier because of plans put in place after Superstorm Sandy.

The length of this disruption — the firm already said it is not returning to the office this year — offers more challenges. In addition to making sure attorneys have the physical things they need to work from home, such as multiple monitors or even room dividers, the firm is consistently checking on the mental health aspects that come with such a disruption.

A native of Ecuador and a graduate of New Jersey City University, Traugh recently spoke with ROI-NJ about the promotion.

The conversation has been edited for space and clarity.

ROI-NJ: You have been the controller at Scarinci Hollenbeck since 2017. How are your responsibilities going to shift?

Katerin Traugh: The biggest shift has been the exposure I have to all the attorneys. Now, I’m discussing their contracts, as well as reviewing all the client matter intake that comes into the firm and making sure we have all the adequate documents. Before, I wasn’t exposed to any of that. I think being the controller gave me the advantage of knowing a little bit about how all the different processes work. For example: billing, collections and records. So, as a controller, my role really overlapped with all of the different departments.

ROI: How does your role integrate with that of Managing Partner Donald Scarinci?

KT: We’re currently restructuring the firm. Right now, we are sharing a lot of the responsibilities, which include handling contracts with the partners, making sure that people are OK with working from home and overseeing the receivables. At this point, we are a team together, both running the firm.

ROI: COVID-19 obviously has been a challenge for all businesses. How are you leading the team during this time — and what are your plans for the rest of the year?

KT: Going into lockdown was relatively smooth, because the firm had an emergency plan since the aftermath of Superstorm Sandy. We were already on the cloud and much of the workforce already had laptops as part of the emergency management plan. As a firm, we had made the decision to keep our workforce working from home for the rest of the year.

With that, we’ve really tried to take care of the physical and mental health of our employees. That looks like providing chairs, printers, multiple monitors, desks and even room dividers for those that do not have a dedicated home office. It’s also attending meetings and checking in regularly.

ROI: During these challenging times, how are you and Scarinci working to increase attraction and retention of employees?

KT: We make sure the employee morale is high. We continue to reach out and make those phone calls, seeing how everyone is doing. We have continued to have all of the different normal meetings that would take place.

Myself or Donald are always included in one of the section meetings, making sure we continue to reinforce the fact that we appreciate their time and are here for them. Believe it or not, I think that’s gone a long way. Also, the fact that we have tried to make everybody comfortable working from home is another small but important gesture.

ROI: Talk a little bit about your background. You started in accounting. What led to coming to a law firm?

KT: I started my career at PricewaterhouseCoopers. I graduated from New Jersey City University, and I was the only one who was given the offer letter to work for PwC, so it was quite an accomplishment. I was there for four years, until I became a senior associate.

At that point, I was given the opportunity to work for Russell Reynolds, which is a high-level executive recruiting firm. There is where I was really able to get additional training and my understanding of how the firm operated. Not only from a budgeting standpoint, but also closing the books and being the key person for the auditors. Then, I decided to find a new focus, as I was getting married and wanted to move back to New Jersey. I had the opportunity to work for Avaya. I was there for four years, fine-tuning my accounting skills. I was reviewing the revenue contracts and learned quite a bit from that. Unfortunately, Avaya filed for bankruptcy, which is when I started looking for new opportunities.

Being a controller at a law firm was new, but, at the same time, I already had a little bit of experience in this industry when I was working at Russell Reynolds. Fortunately, a lot of it came second nature to me because I was already doing it there. At this point, I’ve been in so many different industries I feel like there’s a learning curve, but I’m honestly quick to adapt to new learning environments. So, I just saw Scarinci Hollenbeck as an opportunity to learn something new.

I’m humbled that Donald has the faith in me and has chosen to allow me to run the firm. We currently have 114 people, and I think it’s just an honor. I hope to be a role model to the people like when I was starting, the people I aspired to be one day. As cliche as that sounds, I think anybody can do it. I was just dedicated. I always saw it as an opportunity, the fact that I had to work twice as hard sometimes.