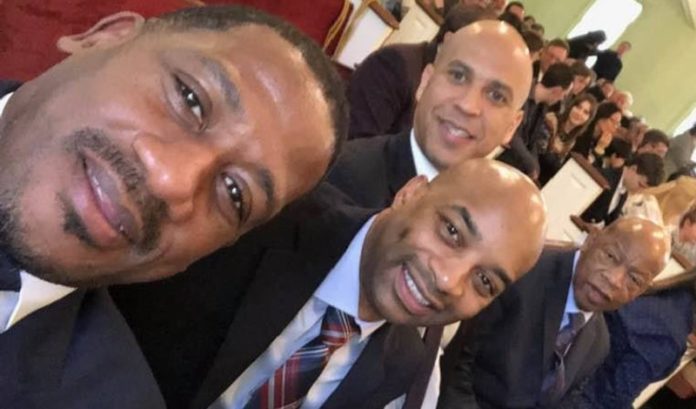 As he was sitting in the front seat of the car, listening to U.S. Sen. Cory Booker ask U.S. Rep. John Lewis question after question about everything from the civil rights movement to the present day while they drove through rural Georgia — headed for a meeting with former President Jimmy Carter — Mo Butler appreciated the moment.

This, after all, was history coming to life. And not just any history. His history, as an African American male in this country. Lewis lived it. Lewis helped create it. And Lewis spoke of it in such a simple and assuming way that Butler said he’ll never forget it.

“I consider him a true American hero,” Butler said. “If not for John Lewis, and people like John Lewis, I would not have been afforded the opportunities that I was afforded in life, and I fully recognize and get that.

“And I’m sitting there, listening to him talk, and I’m just taken by how humble and unassuming a man he was. It was just fascinating to listen to how humbly he spoke about his transformative work.

“He changed the trajectory of the country. And he talked about it in such a humble and soft-spoken way that you really could believe that this was the guy who marched across Edmund Pettus Bridge.”

Butler retold the story Sunday night, a day after Lewis — the civil rights icon often called the “Conscience of Congress” — lost his battle with cancer at age 80. The Democrat was in his 17th term representing Georgia in the House of Representatives.

Lewis was honored by leaders throughout the country and the world all weekend. Former President Barack Obama, the nation’s first Black president — who gave Lewis the Medal of Freedom — recalled how he hugged Lewis on the inauguration stand before he was sworn in and told him he was only there because of the sacrifices he made.

There may have been no bigger sacrifice than on the Edmund Pettus Bridge in Selma, Alabama, on March 7, 1965, when police brutally beat peaceful protesters — a young John Lewis among them — during what is now known as “Bloody Sunday.”

The car ride took place in January 2019. It was just before Booker, one of New Jersey’s two Democratic senators, announced he was running for president. And it occurred on a Sunday morning.

Booker and Butler took an early flight into Atlanta from New Orleans. They were met by Lewis and his chief of staff, Michael Collins, and headed off for a roughly two-hour trip to Plains, Georgia, to take in a Sunday school sermon from Carter, the Georgian who served as the nation’s 39th president.

It was just the four of them. No security. No fancy car. Nothing that would tell other travelers such an icon was in the vehicle.

The questions started well before the car hit the country roads. And, when Lewis started talking about Selma, Butler said he made sure to take in every word.

“We were peppering him with questions about the Pettus Bridge, asking, ‘How, in the face of such brutality, could you remain calm? How could you maintain your composure?’” Butler said.

Lewis explained how, on that day, as a 25-year-old activist — one who had his skull fractured in the fight — had no other choice, Butler said.

“He said: ‘That’s what we were trained to do. And that’s what we trained our people to do. I was a leader within the movement. I had no choice but to remain calm in the face of all that vitriol coming my way, because people were looking to me for direction.’”

Butler is still amazed at his words.

“To be so self-aware and be so mature and be so measured to understand where you fit in what, at this point, was a global movement with global implications is incredible,” Butler said. “This was a young guy who gets it, who understands it, who is able redirect that energy into something that’s very transformative.

“He knew they had to face the vitriol and face the hatred if they were going to transform the country.”

Lewis had every right to have grown old as a bitter man, one who knew the country — even after decades of dissent and discussion — still had such a long way to go.

He was anything but, Butler said. And he showed it on each stop of the trip.

There was a trip to a local eatery, where Lewis attracted the attention normally afforded to celebrities and athletes.

“You grew up hearing about, reading about John Lewis, but you don’t really comprehend what he means to this country until you see people interact with them,” Butler said. “We walked into this eatery and he was like a national treasure. People were walking up to him — all ethnicities, all colors, all backgrounds — just to tell him how much they respected him.

“He sat and talked with every person — took pictures, answered questions and did it in a way that was a real conversation. It was real dialogue in a very warm way. And he did it with each person. It was pretty amazing to sit and watch.”

The next stop was in Plains — at the Plains Trading Post, which dubs itself as having the greatest collection of political memorabilia in the South. Butler said the place lived up to its billing, and he won’t forget the look on owner Ramona Kurland’s face when Lewis and Booker walked in.

“It’s a family business — she and her husband (Philip Kurland) live there, too, and I think they had just finished their morning coffee when we walked in,” Butler recalled. “Her jaw just dropped.”

Butler said the couple proudly showed Lewis and Booker around. The politicians took in the memorabilia; Butler said he just watched the Kurlands.

“They’re into this,” he said. “They’ve devoted their lives to it. They’ve got a whole store dedicated to it — and, then, in comes John Lewis. And he was as nice and humble as you could be. He was very gracious, very open, eager to spend time with them and retell all his stories of the civil rights movement.”

The trip ended with a visit to Carter — and to hear his Sunday school sermon. But, first, there was a private meeting with Carter and Lewis. Butler won’t forget that either.

“When we get to the church, they bring us into Carter’s study,” Butler said. “Watching President Carter and John Lewis embrace, watching the affection and rapport they had with each other, was just another amazing thing to watch.

“You could tell these guys went back decades. There was just a tremendous amount of respect between them.”

Carter delivered his address. The group met briefly afterward — then, the four men piled back into the car and made their way back to Atlanta.

Butler thought a lot about that trip this weekend.

As a longtime aide and confidant to Booker, Butler — a partner with the public strategy firm Mercury — has been in the room with his fair share of powerful people. He’s not easily starstruck.

Lewis, he said, was different. And not just for his accomplishments, Butler said, but the way he handled himself. That trip to Plains wasn’t an outlier, it was everyday life for Lewis, Butler said.

“It’s just so inspiring,” he said. “That generation of leaders like John Lewis really changed the trajectory of the country. Cory always tells the story of how the actions of those people changed his life — how their actions had a ripple effect on him.

“I think it’s the same for a lot of folks, a lot of African Americans in my generation. But for the struggle, but for him getting his head fracture on the Edmund Pettus Bridge, we would not have been afforded the opportunities that we’ve been afforded.

“I look at it from that perspective. This is like a passing of the torch from that generation to this generation.”

The struggles are still there. They are just different now, Butler said.

The way to go about it — with integrity and character — is a lesson Butler took from Lewis that day.

“You can spend your (life) reflecting on the impact that that generation had on the country and on each of us as an individual,” he said. “Then you get the personal experience of actually meeting them, and you realize how humble the guy really was.

Amtrak, devastated by COVID, states solid case for why it could...

Vision for Newark: Mulberry Commons is about so much more than...