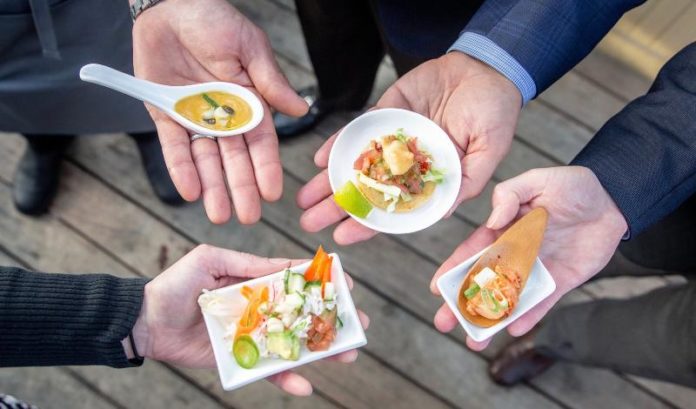 Before he can more formally introduce BlueNalu as commerce to the world … before he can explain how the technology — one that creates fish products in a laboratory — potentially could solve one of the biggest food supply-chain issues on the globe … before he can introduce an example of alternative protein food tech that has zero waste and more than solves any issues regarding sustainability … Lou Cooperhouse knew he needed to do one thing: Give the process a name.

Cooperhouse, the former executive director of the Rutgers Food Innovation Center who is the co-founder and CEO of the San Diego-based aquaculture company, said the issue was extremely important.

“On top of developing a brand-new technology from whitespace in a market that nobody understands, we wanted consumers to know the product is different,” he told ROI-NJ. “We had to develop the nomenclature.”

Cooperhouse said he needed to be able to explain how BlueNalu — which essentially creates fish in a laboratory warehouse — was similar, yet different from vegetable-based “meat” products or even indoor farm agriculture.

Earlier this month, it was decided. After commissioning a study to be conducted by Dr. Bill Hallman of Rutgers University, the term “cell-based” was chosen.

Now, all that’s left for Cooperhouse is to get the product to market — and forever change the complicated and always at-risk seafood supply chain around the world.

Cooperhouse will talk about all this and more this week at the Mazars Food and Beverage Executive Forum — which will be presented virtually this year on July 23.

Cooperhouse will be joined as a keynote speaker by Marc Oshima, a co-founder and leader at Newark-based AeroFarms.

The program will be moderated by Howard Dorman, national practice leader, food & beverage, at Mazars USA. And it figures to have a lot to see about the future of food — and how food tech companies are disrupting it.

BlueNalu is at the forefront of disruption.

The company, which Cooperhouse helped to start two years ago this summer, appears to be well on its way to having global impact.

While so much has been done to find alternative sources of meat as well as the ability to grow agriculture indoors — both of which will help bring food to areas unable to produce it themselves — Cooperhouse said his company is tackling an even greater need: seafood.

“Here are the issues around seafood,” he said. “You have an increasing global demand, because the medical community is telling people to move away from red meat and towards fish. And you have a decreasing supply of a highly vulnerable supply chain, because, unlike land animals, which you can see and you can predict, out in the ocean, it’s like the Wild West.”

There are potential problems in supply chain everywhere, Cooperhouse said.

“You’ve got mercury and microplastics, environmental pollutants, nuclear radiation and warming oceans,” he said. “So, you have a highly vulnerable supply chain. And increasing demand, decreasing supply of vulnerable supply equals opportunity.”

Especially in the United States, where Cooperhouse said Food & Drug Administration studies show 94% of our seafood is imported. Even mahi mahi, a warm-water fish with a Hawaiian name, which Cooperhouse said will be one of the first species the company perfects.

“More than 80% of the mahi mahi we consume comes from Peru, Ecuador or Taiwan,” he said. “We think it comes from Hawaii, but less than 1% comes from there.”

To be clear, BlueNalu is not being built to serve the U.S. market.

Cooperhouse, who said he has investors from 11 different nations, said this is a global product. One that the world population can see it needs more than ever, thanks to the COVID-19 pandemic.

“My argument is the most unstable supply chain in the world in the food industry is seafood,” he said. “It’s massive. And it’s vulnerable.

“All you need is an event like this pandemic, or (a) global algae bloom or warming oceans — which could cause a huge reduction in fish stocks. This is a terribly vulnerable supply chain that we create a solution for.”

They do it in a lab, Cooperhouse said.

“The concept is, you take a cell out of a fish, a muscle cell or a fat cell, and you grow it in huge volumes, like it’s a brewery,” he said. “And then you blend the cells together to make the same finished product. It’s like in vitro with humans. It’s the same thing.”

The finished product, Cooperhouse said, has all the qualities of fish, such as the ability to withstand heat. It even smells like fish. That was the takeaway from a demonstration last winter.

Cooperhouse is confident BlueNalu not only can reproduce staples like yellowfin tuna and mahi mahi, but top-shelf products, such as Chilean sea bass, snapper and bluefin tuna — a huge plus.

“It’ll be hard for the meat guys to ever do (prime product) like a ribeye steak, or anything above a hamburger,” he said.

Now, it’s a matter of getting to commercial finishing line.

BlueNalu closed on a 38,000-square-foot facility in San Diego earlier this summer — a facility that will serve as its research & development base. It also closed on nearly $20 million in new seed money. Now, the company is just awaiting FDA approval.

“We’ve already submitted documentation to the FDA,” he said. “We’re waiting on a ‘no further questions’ kind of letter. We need to get that FDA clearance, and we’re building out our new facility right now. That will be online next summer.

“So, if both of them come together, we’ll actually be in commerce late next year. Then, large-scale production happens.”

Cooperhouse can’t control his excitement. He has seen the rise of new food since his time at Rutgers.

“The whole category of food has changed dramatically,” he said. “It’s really become much more experiential and about embracing sustainability. I went to a lot of public presentations on the food industry at Rutgers and I was also doing some consulting, helping incubator programs around the world.

“Along the way, I saw something amazing happening. And I said, there’s a sweet spot that is really disruptive: It’s alternative protein.”

He jumped at the chance to help create BlueNalu.

“The big opportunity is in seafood,” he said. “It’s a game-changer.”