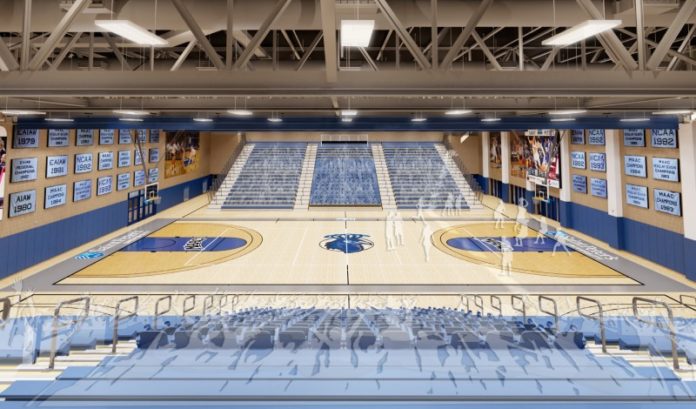 Saint Peter’s University announced on Wednesday that it has received a $5 million gift for the school to begin renovating the The Victor R. Yanitelli, S.J. Recreational Life Center, home of the Peacock’s men’s and women’s basketball and swimming teams, and the women’s volleyball team.

The gift was provided by Thomas P. Mac Mahon, ’68, member of the Saint Peter’s board of trustees and the retired chairman and CEO of LabCorp.

The renovation is anticipated to transform the center while enhancing its experience for present and future students, Division I student-athletes, alumni, members of the local community, staff and more.

The first phase will include the creation of a modern basketball and volleyball arena. The arena will feature a number of amenities, including retractable bleachers, a full replacement of the hardwood court, updated branding and signage, an entryway, enhanced lighting and a new video scoreboard. The gift will also support the creation of a Hall of Fame for the school’s Peacock athletes.

“This transformative upgrade to our shared volleyball and men’s and women’s basketball facility will provide our teams with the infrastructure they need to continue striving for athletics excellence within the Metro Atlantic Athletic Conference, while also providing a quality space for all of our students to participate in recreational gym activities,” Rachelle Paul, director of athletics, said.

Construction is slated to begin this summer.

“Tom has already made an indelible impact on the university through his extraordinary philanthropy in 2012, enabling us to break ground on the Mac Mahon Student Center,” Eugene J. Cornacchia, president of Saint Peter’s University, said. “We are humbled by his continued belief in and support of Saint Peter’s. It is fitting that his legacy will now grow on the West Campus where he made his mark as a basketball player and member of the ‘Run Baby, Run’ team that defeated Duke in the NIT quarter finals more than 50 years ago.”

In honor of his former 1967-68 men’s basketball teammates, Mac Mahon has named the space the “Run Baby Run Arena.”

“My relationship with Saint Peter’s has been one sided in that it has done more for me than I could have ever imagined,” Mac Mahon said. “The foundation of my life was built on the streets of Jersey City, at the corner of Kennedy Boulevard and Montgomery Street. This project has been a longtime dream of mine and I am thrilled that it will soon come to fruition. I am also delighted that this gift will pay tribute to my teammates, celebrate our time together at Saint Peter’s and create a lasting legacy of basketball in the late 1960s.”

The long-term master plan for the RLC will transform nearly every aspect of the facility. Short-term plans also call for a swimming pool, locker rooms and more. More projects will be phased in as additional funding is secured.