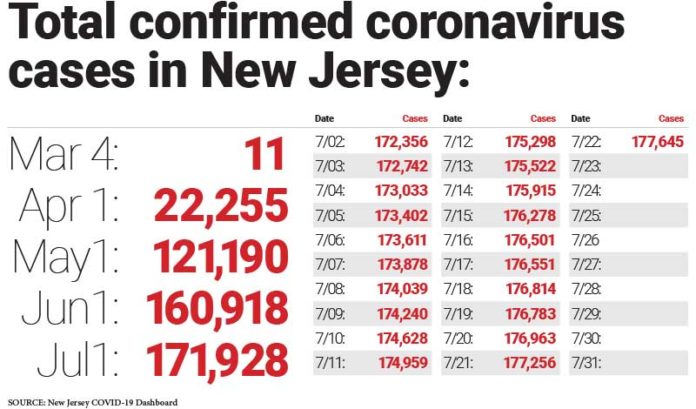 “It is affecting everything we do,” she said, before rattling off its impact on case identification, contact tracing and quarantine recommendations.

Gov. Phil Murphy was a little more Jersey in his take.

“The turnaround sucks,” he said. “There’s no other way to put it.”

While New Jersey has one of the lowest rates of transmission — and test positivity — in the country, both Murphy and Persichilli said Wednesday the slow turnaround times are making things tough. They are a result of increased testing needs elsewhere, which are jamming up the system.

“We’re not immune to the national fires that are raging elsewhere,” Murphy said. “When you have 31 states on your hot list (including California, Texas and Florida), you get a sense of the scale.”

Murphy said he feels New Jersey has, per capita, as great a testing capacity as any state — to the point the state is now imploring people to get tested because the demand is so low.

“We’re doing everything we can,” he said.

Persichilli detailed some of the efforts, saying Wednesday the state was doing a pilot program involving point-of-care testing at a homeless shelter.

Getting enough machines to handle such testing — which cannot be done as rapidly as lab testing — is an issue.

Persichilli and Murphy both addressed the once-vaunted Rutgers University saliva test, which has not been in the news much since its introduction.

“I know the arrangement took longer than any of us wanted it to, but it’s still a big piece of our aspiration going forward,” Murphy said — adding that he wanted to bring a Rutgers official to the briefing soon to talk about it.

Persichilli said the state has an agreement to get the first 30,000 tests and that the state is using them — but she did not have more complete details. 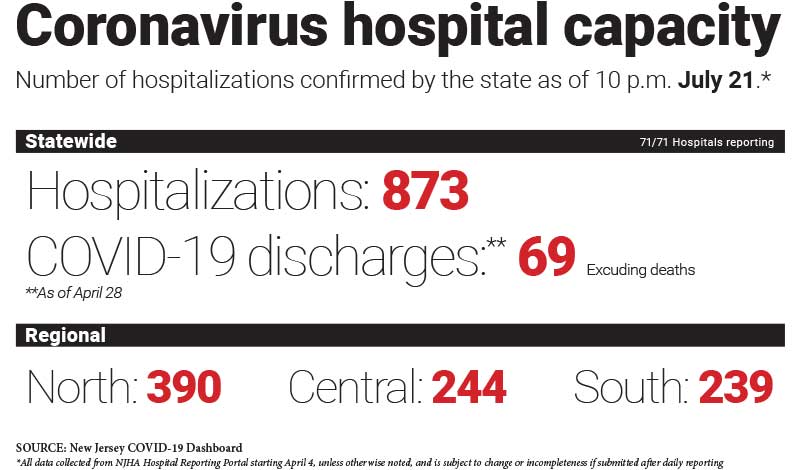 Murphy says there’s “noise in these numbers” due to collection issues, but said there were 390 additional COVID-19 cases, raising the state total to 177,645.

And, while he said there may be more, he emphasized that 390 are confirmed — and should be confirmation that the state is still in the midst of a pandemic.

These numbers get more complicated by the day — as they are constantly being updated and should not be considered real time. The state knows of just five fatalities in the 24 hours leading up to 10 p.m. Tuesday night — but that still means other deaths in that 24-hour period may become known later.

The hospital numbers, as of 10 p.m. Tuesday:

Murphy said he consistently checks in with health care leaders and is confident about the state’s ability to handle a second wave.

“My answer as a non-medical professional is, we’re as ready as any state in America. But, while we hope for the best, we’re going to continue to prepare for the worst.”

Murphy on whether the state may sue the federal government over President Donald Trump’s administration’s desire to not have undocumented workers counted in the census (and it’s not clear if such a rule can be implemented):

“When we talk about 9 million residents, it’s everybody who is here. These are folks — and we have eulogized many of them over the past couple of months — who have lived extraordinary lives, who have come here for the American dream, who worked their tales off to educate their kids to get, as best they can, some foothold into the middle class America, middle class New Jersey.

“They are here, and they deserve to be counted. What actions we take beyond that I won’t comment on.”

Murphy said the question was a good reason to push more Jerseyans to complete the census at www.census2020.gov.