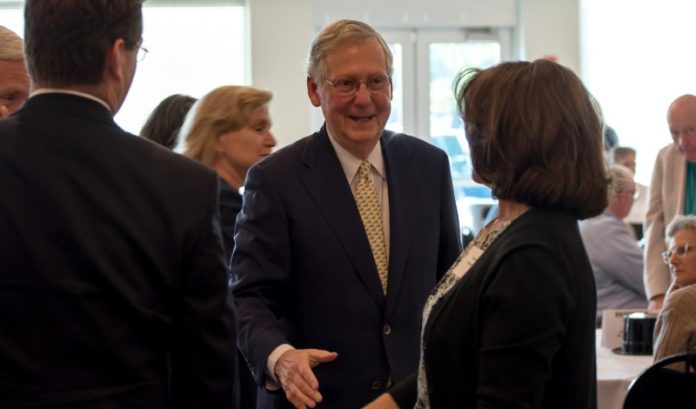 Gov. Phil Murphy did not pull any punches when discussing a stimulus package favored by Senate Majority Leader Mitch McConnell — one that does not include state aid.

Murphy, who has been pushing for federal money since the pandemic started, questioned McConnell on a number of issues — but mostly pointed out that the longtime Republican senator from Kentucky (elected during President Ronald Reagan’s administration) has not had to balance a budget in decades.

Among other things, Murphy stressed the need for federal aid to help with school funding and the increasing number of residents on Medicaid.

Murphy, speaking during his COVID-19 briefing, said he has never been confident that McConnell would help states get aid, which is one reason he said he has pushed for the ability to borrow money even before federal aid is decided.

A look at his remarks:

“I will start today with my reaction to U.S. Senate Republican Leader Mitch McConnell’s proposed stimulus bill, which refuses to offer any additional support to states. And, it is this: This is a slap in the face of every governor across the country — Republican and Democrat — who have shouldered the responsibility of responding to this pandemic.

“Even with the hard-fought flexibility for the $2.4 billion that we received from the CARES Act’s Coronavirus Relief Fund — a fight we had to take up directly with the (President Donald) Trump administration — under Sen. McConnell’s plan, there would be zero flexibility with any new funding to come.

“What New Jersey has gotten back is a drop in the bucket compared to our needs. Moreover, you would be hard-pressed to find a state that would say differently.

“Because of this pandemic, we are undergoing a fiscal crisis the likes of which has only happened twice in our state’s 244-year history — the Civil War and the Great Depression.

“In May, we projected that this pandemic would dig a $9.9 billion budget hole by June of next year. We’re not alone. The nonpartisan Center for Budget and Policy Priorities estimates that, nationwide, states are staring down a combined hole of $555 billion by Fiscal Year 2022.

“We have slashed planned spending to enact an austere, stopgap budget, and we dipped into the Rainy Day Fund just to get us through the next two months. We have directed all state departments to plan for 15% budget cuts starting this fall.

“In the meantime, we cannot ignore our current needs — meeting sharply increased costs for emergency response, public education, public transit, small business aid and the full range of social services that our residents rely upon.

“School funding is especially critical, because we cannot fully support our districts in their plans for the upcoming school year without help from Washington. We are staring directly at a $1 billion cut in aid to our public schools. And, we’ll have to further cut operating aid to our struggling colleges and universities, which we have already cut by over $200 million.

“Over the past five months, more than 120,000 New Jerseyans have lost their health insurance, and the costs of Medicaid have gone up. We cannot lose one penny of essential federal aid to support these residents — and, given that we are facing both a health care and an unemployment crisis, it would be cruel to see them cut out.

“The House would protect these residents — as well as those in long-term care facilities and residents with intellectual and developmental disabilities — through the HEROES Act it passed. But Sen. McConnell’s bill would leave them, and millions of others, out in the stifling summer heat to wither.

“We will do everything we can to get the message through to Sen. McConnell that his plan would hurt the very people who are going to rebuild this country stronger after this pandemic passes. He has my word on that.”