We’re going to make it easy. The following is the list of states from which you DO NOT need to quarantine if you travel into New Jersey. That total — just 15 states — is much smaller than the areas that now require a quarantine (34 states plus Washington, D.C., and Puerto Rico).

States and territories (and federal districts) are placed on the list if they have a positive test rate higher than 10 per 100,000 residents or a 10% or higher positivity rate over a seven-day rolling average.

Travelers and those residents who are returning from impacted states should self-quarantine at their home, hotel or other temporary lodging. Individuals should leave the place of self-quarantine only to seek medical care/treatment or to obtain food and other essential items.

“New Jersey’s restart and recovery process relies on our collective effort and commitment to beating COVID-19 and driving down rates of transmission across our state,” Murphy said in a statement. “Individuals traveling from these states must remain vigilant in their actions and proactively get a COVID-19 test and self-quarantine to prevent additional outbreaks from spreading throughout New Jersey.”

And here’s the list in the more traditional format. If you arrive from these areas, you DO need to self-quarantine:

Other notes from Tuesday: 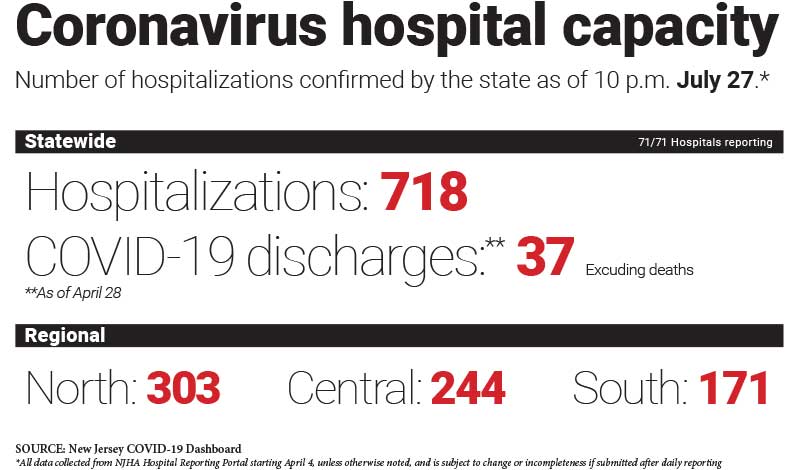 Murphy said the daily health metrics were a “mixed bag.”

And, while the spot positivity rate is again under 2%, at 1.87%, the rate of transmission — which may be the most important number — is up again and now sits at 1.14.

“So, both anecdotally when you hear about house parties and other flareups that we’re seeing, when you look at the raw numbers, it’s a mixed bag at best — we’re not out of the woods yet,” he said. “And we need everybody to remain vigilant.”

As of Monday at 10 p.m., there were 718 hospitalizations, which included 112 people in intensive care — 50 of whom were on ventilators.

That final number can not be stressed enough. Early in the pandemic, the state was pleading for federal help to acquire 2,500 ventilators — and feared that number would not be enough.

Should pregnant women get COVID-19 vaccine? Here’s why one (pregnant) doctor...

Merck wrapping up pair of acquisitions