Gov. Phil Murphy tried to sound pleased by some of the health numbers he listed at his COVID-19 briefing Friday, but he was clearly upset with issues that other data revealed.

Murphy, as he often does, pointed out some positive elements, mentioning that, despite 699 new cases and a total of 181,660, New Jersey remained in the 10 states with the lowest number of active cases per capita, and the test positivity rate of 2.15% (as of July 27) kept it among the five states with the lowest rates.

But, Murphy pointed out that the important rate of transmission — how many additional cases stem from a single case — rose to 1.35. And he said his administration anticipates that rate rising in the coming days.

The day’s rate was clearly at the highest level since the major March-April decline from its peak.

“Look, the numbers are setting off alarms that we take very seriously,” he said. “We still may be among the leaders in having lower case numbers and daily positivity rates — we don’t take that for granted — but we are standing in a very dangerous place. As I said, the alarms are going off.

“The only way to silence these alarms and get back to the process of moving forward is for everyone to take them seriously. Not just most of you, but all of you—all of us. We are not past this. Everyone who walks around refusing to wear a mask, or who hosts an indoor house party or who overstuffs a boat is directly contributing to these increases.

Murphy also pointed out that an average of 350 positive cases each day a month ago had risen to an average of 550 over the past week, “meaningfully higher right now, on average.”

“We all want to get back to the way things were,” he said, “but, right now, that is just not possible” 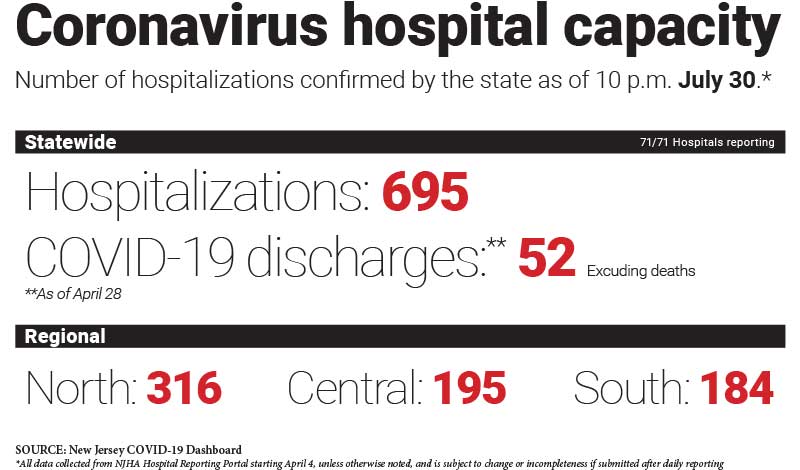 Murphy praised his team for an improved online dashboard with more thorough data breakdowns available. (Got to covid19.nj.gov to view it.)

On one more positive note, Murphy said that, for the 24 hours ending at 10:30 p.m. Thursday, there were no in-hospital deaths reported — the first time that has happened since March 10, 142 days ago.

During her portion of the briefing, Heath Commissioner Judith Persichilli said the state will augment the $5 million it already allocated in local funding support with an additional $32.3 million in federal funding.

The money, which will go to county and local health departments over two years, will include $13.7 million in Centers for Disease Control and Prevention money for 21 counties and the city of Newark to hire additional employees for testing, contact tracing and other measures.

Another $18.6 million will go to 77 local health departments that are not eligible for the other funds, for outreach coordinators and other measures.

“We couldn’t be clearer, every single darn day,” a visibly frustrated Murphy noted.

Murphy, who had earlier in the month criticized Senate Majority Leader Mitch McConnell (R-Ky.) over Senate Republicans’ proposed stimulus bill, once again ripped into him — this time for sending the Senate home for a long weekend without taking action on any federal unemployment benefit renewal.

“The ultimate act of irresponsible behavior and dereliction of duty,” is how the governor characterized it.

Murphy also made his regular pitch for New Jerseyans to fill out the census and ensure the state gets its fair share of federal funding. Go to 2020census.gov to fill it out, or visit census.nj.gov for more.

Murphy continued to beat the drum for what he called “common sense for the common good”:

We can do this, folks. We’re New Jersey. We’ve never backed down from a fight, and we’ve never lost. We always punch above our weight. We always get there.”

For Murphy, Quest Diagnostics ribbon-cutting is example of what can be