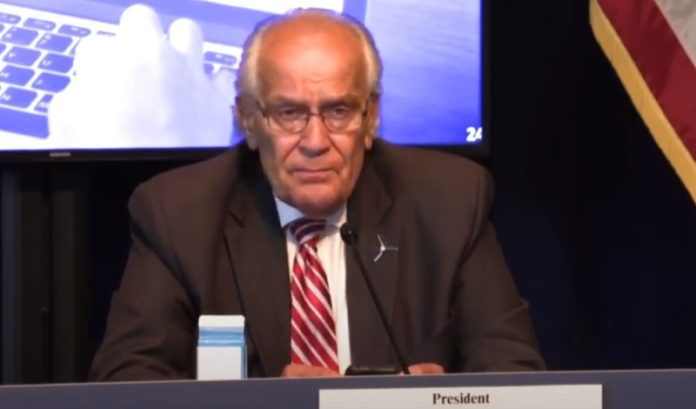 Much of the talk at Gov. Phil Murphy’s COVID-19 briefing Wednesday wasn’t about the pandemic so much as the aftermath of Tropical Storm Isaias.

The governor noted that 1.4 million households had lost power due to the storm that struck Tuesday, and as of noon Wednesday, about 977,000 still were waiting for it to be restored.

That compared with 1.7 million outages during Superstorm Sandy, Murphy pointed out, with the difference in speed between the two making the biggest problem the outages, rather than flooding.

Board of Public Utilities President Joe Fiordaliso also appeared at the briefing, and noted that New Jersey was among the hardest-hit states in the region, as 3.5 million people had lost power across 14 states.

Murphy, who had toured a hard-hit portion of the state, noted that one place where the power outages collided with the pandemic was in the aid from out-of-state utility crews coming in to work on downed poles and wires.

Fiordaliso noted that more than 2,000 crews had arrived from multiple states, and had helped with restoring power to about 500,000 households so far.

However, he said further restoration would take time. He hoped to see 80% of households have power restored by Friday night, with the rest falling into more challenging situations such as isolated locations.

“It’s going to take, unfortunately, some time,” he said. “I’m sorry to have to report that, but it’s just the reality of the situation.”

Both he and Murphy lamented that New Jersey’s luck had clearly turned after a mild winter.

“We will continue to work until everyone is restored,” he said.

The important rate of transmission continued to decline, at 1.32 new cases from each case, but remained above the important 1.0 level.

There were 784 total hospitalizations, with 295 confirmed COVID cases and 489 under investigation. Of those patients, 117 were in intensive care, with 47 on ventilators.

Another bit of bad news: The daily test positivity rate came in at 2.57%, the first time over 2.0 in several days, but still low, Murphy noted.

Health Commissioner Judith Persichilli announced the start of a public awareness campaign encouraging people to get tested and cooperate with contact tracers as necessary.

The campaign, dubbed “For Each Other, For Us All,” will emphasize the need for residents to work together to limit the pandemic, including educating people about contact tracing and a focus on at-risk communities.