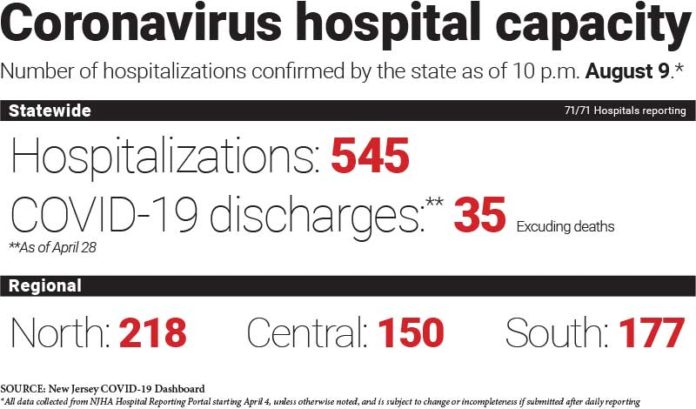 Gov. Phil Murphy didn’t dispute the number: With approximately 685,000 people in the state applying for unemployment benefits last weeks, New Jersey would have to come up with $68.5 million to pay its share (25%) of President Donald Trump’s proposed $400 worth of weekly extra benefits.

Murphy said he just doesn’t know where that money would come from.

“Where do we get that money?” he asked.

Murphy said cost shares quickly add up — and that the money the state got from the CARES Act is limited, too.

More than that, Murphy said just implementing a program where the state would pay a share of any extra unemployment benefits would take weeks to set up because it would require a new platform to be built.

Speaking at his COVID-19 briefing Monday, Murphy said it’s time to put partisan politics aside — and time to enact legislation that actually matters. The executive orders President Trump signed this weekend — which may not be legal — do not solve the problems states are facing, Murphy said.

In addition to the extra benefit idea, Murphy railed against Trump’s temporary elimination of a payroll tax, too.

“Unfortunately, a payroll tax holiday will not save workers anything in the long run, as they will still be on the hook for the taxes owed come next April 15,” he said. “In addition, a payroll tax holiday diverts billions of dollars we need for Social Security and Medicare — the former the lifeline for millions of American seniors and the former the sole means of health care for countless many others who are wary of becoming COVID-19’s next victims.

“A payroll tax holiday means nothing to the unemployed when there’s not paycheck coming in — a fact made worse since the $600 enhanced weekly unemployment benefit expired at the end of July. In its place, the President has proposed a $400 benefit, but offered no clear guidance as to how states will pay for, or even administer, this program. Millions of unemployed workers — and their families — deserve better.

“Numerous experts have already spoken out that this plan would have little, if any, stimulus-effect on our national economy.”

“Let’s be clear about something — states are going broke,” he said.

The state was very specific on the four new confirmed COVID-19 fatalities — which increased the overall total to 14,025.

The deaths took place on April 21, May 19, July 23 and July 30. There were five deaths in the past 24 hours; those are now under investigation. And there are 1,853 fatalities that are presumed to be from COVID-19.

Murphy said he had no news to report on schools, but he did say he would not support anything that said face coverings were optional in schools.

“That’s just not consistent with what the facts and the science present,” he said.

Biden: Workers at companies of at least 100 employees now required...