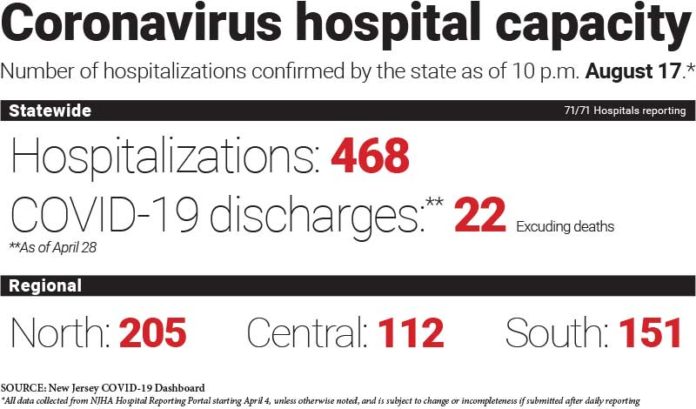 Attorney General Gurbir Grewal announced Tuesday afternoon on Twitter that the state intends to sue the United States Postal Service over issues regarding voting by mail.

The point of the suit is unclear, but CNN reported several states are considering suing the USPS to stop it from instituting new operational changes that could slow mail service prior the election.

Grewal, in a tweet shortly after 1 p.m., said, “I can confirm: New Jersey will be suing @USPS.”

Grewal went on to tweet: “Voting is safe, secure, and reliable. We intend to keep it that way. As AG, I’ve made it my mission to hold accountable those who try to corrupt our political process. Lawsuit coming soon.”

I can confirm: New Jersey will be suing @USPS.

Voting by mail is safe, secure, and reliable. We intend to keep it that way. As AG, I’ve made it my mission to hold accountable those who try to corrupt our political process.

There also were 10 new fatalities related to COVID-19, bringing the state total to 14,086. Nine of the ten fatalities came from Aug. 10 or sooner, including four Aug. 15.

Gov. Phil Murphy added Alaska and Delaware to the states from which travelers entering New Jersey are subject to a 14-day quarantine. There are now 35 states and territories.

The travel advisory applies to any person arriving from a state or territory with a positive test rate higher than 10 per 100,000 residents or a state with a 10% or higher positivity rate over a 7-day rolling average. But it is unclear how effective the request has been.

Murphy, in a tweet, on word California had reached an emissions deal with automakers that was stricter than what was pushed by President Donald Trump.

We were proud to join CA and sister states to oppose the Trump administration’s misguided rollback of vehicle emissions.”

A huge step in the fight against climate change.

We were proud to join CA and sister states to oppose the Trump administration’s misguided rollback on vehicle emissions.

NJ will never abandon our obligation to create a cleaner environment for our kids.https://t.co/eTNYGAyDxp