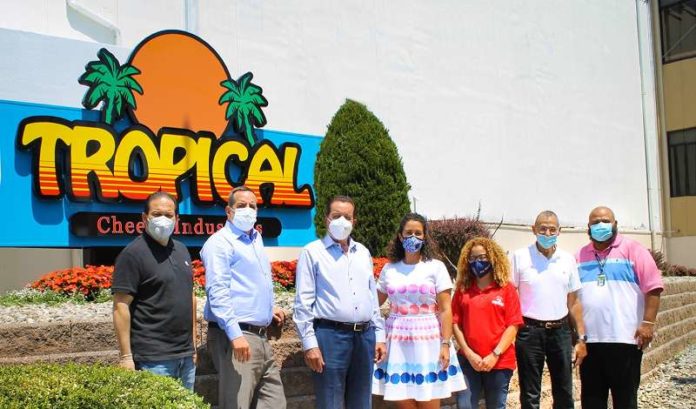 The product catalog of Tropical Cheese Industries is a surprisingly reliable history book.

In broad strokes, one can trace immigration patterns of Hispanic peoples to the Northeast in the timeline of the local company’s introduction of products.

When the region held a concentration of immigrants from the Caribbean, like the company’s founder, it focused on island staples such as queso de freír and queso blanco. When immigration turned to Mexico: queso fresco and cotija. When more Central Americans entered the picture: queso seco and various cremas. Finally, with the South American arrivals: quesito colombiano, queso ecuatoriano and queso peruano.

If it’s not obvious already, there are few companies as tied to the region’s Hispanic community as Tropical.

Rafael Mendez, founder and president of the company, came from Cuba as a teenager in the ’50s. Vanessa Mendez-Gamez, his daughter and the company’s chief marketing officer, said he saw an opportunity to start a business that catered to a blossoming consumer base.

“In the Northeast, there was no Hispanic cheese company meeting the need for that community,” she said. “My father felt he could do that. So, that’s how the company was born … to address that void.”

Several decades later, the company has become an East Coast market leader. And, given that it now produces items such as muenster cheese — a lost German tourist in the company’s Hispanic cheese catalog — it’s not just making cheese marketed toward the Hispanic community.

Regardless, everything in the company’s list of 300 SKUs is still made by Hispanics. Of the company’s around 400 employees, about 95% are Hispanic individuals, Mendez-Gamez said.

All the company’s manufacturing is done at its Perth Amboy headquarters. The company’s fresh cheeses, which aren’t aged and thus have a shorter shelf life, are distributed across the country. Products are sold at big-box stores such as Costco and Sam’s Club, typical grocers such as ShopRite and Stop & Shop, independent supermarkets, bodegas and bakeries.

That made Tropical one of those food manufacturers that was suddenly struck with through-the-roof demand as shoppers rushed to grocery stores for supplies in the early months of the pandemic.

“I think part of it was that our food is comforting for some and they have a nostalgia for their home countries, their upbringing — they connect to that through our product,” Mendez-Gamez said, adding that the company was “operating close to 24/7 for two months just to try to meet that demand.”

Demand has settled since then, although higher on the curve than the company is accustomed to. Any profit from that spike in demand has been accompanied by an increased investment in sanitation in the company’s manufacturing and distribution centers.

Still, Mendez-Gamez said this whole era — and the need for nostalgia their product fulfills — has brought even more of a name to the strong Tropical brand.

“Stores actually call us requesting our product, because they know we’re the market leaders and that we’re extremely knowledgeable about the Hispanic cheese category,” she said. “So, I think, as we continue to add new product lines and expand, our future is extremely bright.”