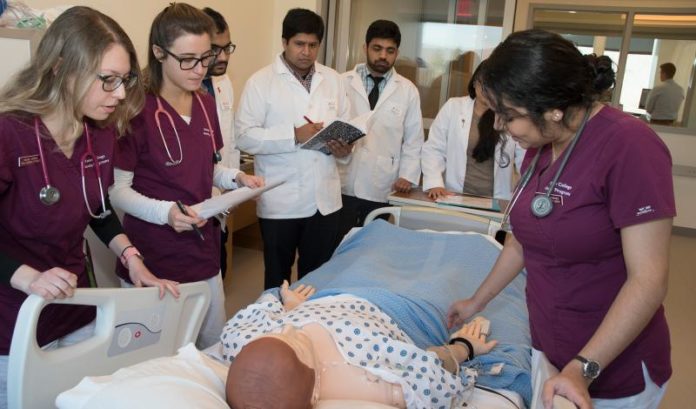 There’s a time for theory, and a time for practice. But, in medicine during the current health care crisis — it’s time for both.

So, although Ramapo College of New Jersey’s announcement that its first-ever doctoral program would be a practice-oriented degree for nurses wasn’t inspired entirely by the pandemic, it’s arriving at just the right moment.

Kathleen Burke, assistant dean of nursing at the Mahwah-based college, said there’s very often a disconnect between new, evidence-based knowledge in health care and the applications of it in the health care continuum. And doctorate-equipped nurses have the potential to bring those scientific insights to real-world settings better than almost anyone.

“I think that’s an unbelievably significant right now, because health care is changing practices on a daily level during the COVID-19 crisis,” she said, adding as an example that, “We never used to prone patients to the extent we do now; but we’ve found (in COVID-19 positive patients) that their oxygen levels increased, so something like that change may continue within practice.”

After several years of Ramapo College having internal discussions about introducing this program, it’s now joining a handful of other Doctor of Nursing Practice, or DNP, credential offerings at colleges in the state.

But it’s the only academic partner in the health care practice-focused New Jersey Council of Magnet Organizations. This partnership of local credentialed institutions looks at how the state’s facilities can help one another in advancing health care, according to its website.

“We’ve got one of the largest numbers of magnet hospitals compared with other states,” Burke said. “And these hospitals are really getting together to share best practices — what they’re doing and how they’re doing it. It’s a far cry from 10 years ago, when every hospital considered others competition and no one talked to anyone.”

Burke expects Ramapo’s role in that local network to allow it to stay abreast of new standards of practice in a way that’ll serve not only students, but the continuum of health care that nurses are entering into.

“A hospital can be a dangerous place, unless you’ve got a strong advocate pushing all of that best practice,” she said. “Everyone within health care right now is looking very strongly at interdisciplinary approaches and how they need to work together to follow best practices.”

Organizations such as the American Association of Colleges of Nursing have for as long as 15 years advocated for fueling the country’s nursing contingent with doctorates. It’s seen as a way to fill in gaps in care for an industry starving for more high-level professionals.

Peter Mercer, president of Ramapo, said it’s also an answer to changing economics in the health care sector and the introduction of new technologies.

“In the days when a patient’s record was on a clipboard, always seen over by a head physician, your control over the environment was much easier than it is now,” he said. “Now, there’s a need for coordination … and, with the new roles that introduced for health care staff, the advent of the nurse practitioner was almost inevitable.”

Burke said recent years have featured an increased use of nurse practitioners across the country, particularly in rural areas where there’s often a dearth of qualified physicians in the area.

“Nursing practitioners, depending on state regulations, are assuming a large amount of health care responsibility for particular patients, as well as populations,” she said. “So, I do think there’s definitely a need. Along with that, I think you’re going to notice centers of innovation for nursing practice becoming much more common — and, with that, you’ll see a dramatic effect on patient outcomes.”

Ramapo has existing programs offering bachelor’s and master’s degrees in nursing, educating the future (and current) frontline critical care personnel that are in short supply in more than half of the country’s states, according to various reports. Ramapo’s doctoral program, which will be accepting students for admission this fall, builds on its master’s degree for nurse practitioners.

“What we’ve heard is that students like us and they want to come back, which says a tremendous amount about our faculty and the atmosphere they provide for the students,” Burke said.

Princeton’s plan: Freshman, juniors on campus in fall — sophomores and...