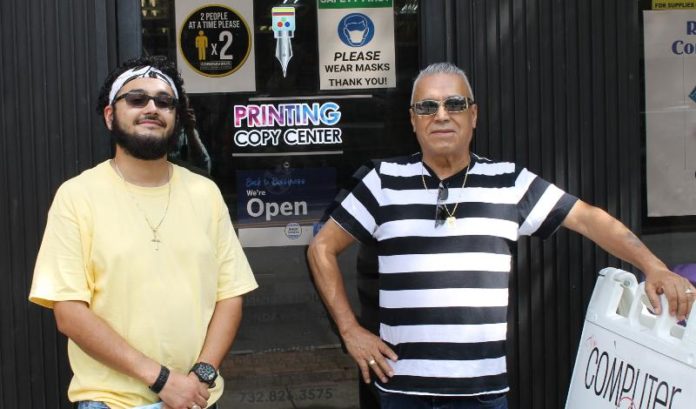 Behind the curtain of a profile like this one, there are the rough patches.

But there’s no reason these days to hide the moments for a business owner that often go unspoken … the late nights worrying about bottom lines, the fretting about bills.

Because, even if they’re on full display, and even if they’re not glamorous, business owners such as Jose and Darnell Arevalo know there are a lot more people than just them experiencing such anxieties.

So, they’ll admit that they’re downright stressed about the effect of the COVID-19 pandemic on their Perth Amboy small business, The Printing Shop.

There’s no concealing the impact the state’s stay-at-home mandate is having on a company that providing printing services that rely strongly on an in-person component. The industry it’s in also wasn’t declared an essential business at the outset of the pandemic. Additionally, there’s a problem with demand for some of the key services of their business and other printing shops.

Here’s a thought experiment: When’s the next time someone might be in need of a stack of pristine business cards to pass out in a conference hall?

In spite of all that, these business owners — after being forced to close their shop for about two full months — are hoping to overcome this challenge.

Jose Arevalo has faced plenty already. When he emigrated from Colombia to the U.S., he hardly knew a word of English. He immediately started a business, calling on his experience running a printing company with his brother in his home country.

The language barrier was a struggle, he said. He also had to learn how to offer new services as niche demand arose, such as book printing and concert tickets. He even cuts keys for houses.

His plan for some time has been to retire and leave the business in the hands of his son, Darnell, who grew up in the ’80s running around and fulfilling little tasks in his father’s shop.

Darnell Arevalo said his dream was to take his father’s business and expand it to other locations. Right now, however, he’s just hoping business picks up.

“It’s tough — there’s less volume now, less walk-ins,” he said. “It’s a different cash flow because more people seem to be using credit cards. There’s a lot of little things that have affected how we’ve had to run the business compared to before.”

He added that he’s been researching ways of conducting more business through internet transactions and generally moving the business in a more digital direction.

As he tries to implement that, as well as get his family business rolling again after a few months of closure, he’s sought the protection of emergency funds from a Paycheck Protection Program loan as well as a small grant from the city of Perth Amboy.

“That all helped,” he said. “We’re not too far off track, but we’re not ahead of the game, either. Mostly, we’re still fighting, wrestling to get through this every day. We’ll continue to adapt depending on what happens.”

As bad as he’s bravely willing to admit things are, Arevalo doesn’t look at closing the business as an option.

“My father started this,” he said. “I don’t want to let it go. I want to take over and run it. That’s my goal still — to run it and keep it within the family. So, hopefully, we’ll be able to stay in business and take it to the next generation.”