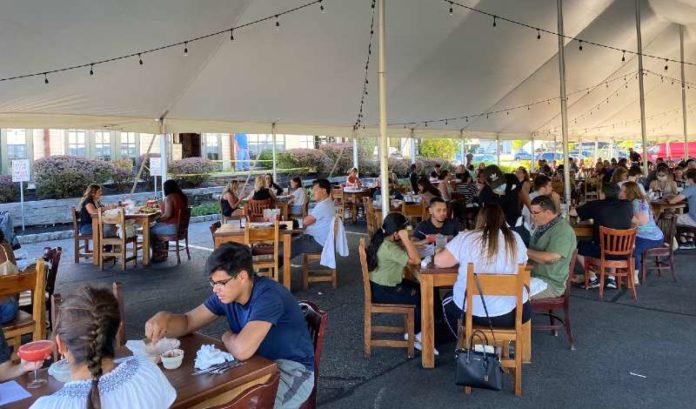 Marilou Halvorsen, the head of the New Jersey Restaurant & Hospitality Association — and the person who has been out in front in the battle with Gov. Phil Murphy to allow for indoor dining — acknowledged the obvious.

But Murphy’s decision to allow some indoor dining at 25% of capacity — starting Friday, in time for Labor Day weekend — is not enough. The fight isn’t over.

And — as the governor can appreciate — it’s all about the data.

Allowing just 25% capacity is a start, Halvorsen said, but it’s not enough to bring the industry back to life. Smaller restaurants — the mom-and-pop, hole-in-the-wall joints the state brags about — are far from where they need to be to make a profit.

“If you’re a smaller restaurant — and you only have seating for 25 or so to begin with — it may not even be worth it to reopen,” Halvorsen said. “Having only 25% is not a lot for them.”

Halvorsen is hopeful that Monday’s decision is just the start.

“We’re obviously excited about the restaurant industry being brought into the reopening, but we’re obviously looking for that number to increase as we move forward — especially as we get into the colder seasons,” she said. “We hope there will be continued conversations going forward.”

More than that, Halvorsen said she hopes restaurants are treated fairly moving forward. Should there be another spike of cases, she worries that it will immediately be blamed on indoor dining — despite the fact, she said, that the industry has safety protocols that only are topped by health care.

“My concern is that, with schools going back and gyms opening, that if key numbers go up, it automatically will be blamed on restaurants,” she said. “We need to make sure the contact tracers are really transparent about what they’re finding, because we’re seeing in other states that restaurants are not the case. So, we really need to make sure that there’s transparency.”

If you think Halvorsen is being harsh, listen to some others.

Eileen Kean, the New Jersey director of the National Federation of Independent Business, said Murphy has not gone far enough.

“This has been a financial and emotional roller coaster for independent restaurant owners who were shuttered in March, then bought food in July when told they could reopen indoors, but that didn’t happen, so they lost money and hope,” she said. “Now, months later, word comes from the governor on Twitter that they can reopen inside before Labor Day weekend, which is good, but, at 25% capacity, they still can’t make a profit.

“Many restaurants operate on narrow profit margins and only had a few months of cash reserves, so, while loans and grants extended that, it has gone on so long that some had to close for good. Mostly those with savings, or who owned a building and didn’t have pay rent have lasted to this point. But they will only survive if they are safely able to increase to 50% and hopefully full capacity in short order.”

Michele Siekerka, the head of the New Jersey Business & Industry Association, lamented a lost summer. She said the decision was welcomed, but long overdue.

“The fact is, most restaurant owners were able to reopen their doors in a safe and responsible manner when they were originally permitted to do so with limited capacity on July 2,” she said. “New Jersey essentially saw more than eight weeks of prime summer season go by the wayside, while our restaurant patrons went across the river to dine in Pennsylvania and Delaware. At the same time, any increase in transmission rates was ascribed to large outdoor parties.

“For restaurants in our Shore and urban areas, and those eateries that are not able to accommodate outdoor dining, this unnecessary loss of their peak season will be more damaging, as many rely on that business to survive for the year.”

Siekerka said the data shows restaurants may not be able to make it.

“The odds are still long for restaurants to thrive with limited indoor capacity, particularly as we steer toward colder weather in the coming months, when outdoor dining will not be as feasible,” she said. “We are pleased that restaurants are finally getting their rightful opportunity to reopen indoor dining. But, for some, we hope it’s not too little, too late.”

Success lessons, cautionary tales for women from female entrepreneurs who should...