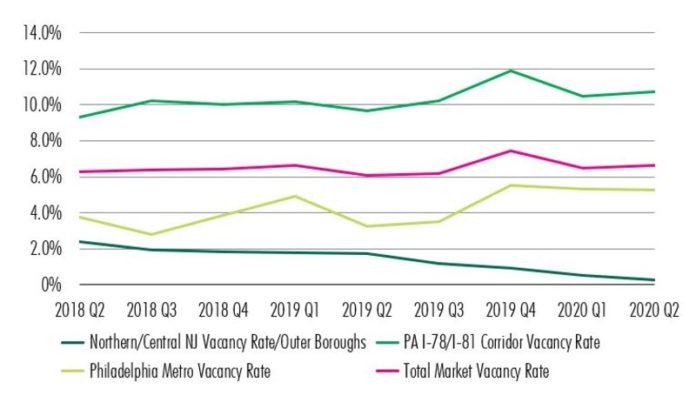 The Northeast industrial real estate market stayed relatively stable in the first half of the year despite the COVID-19 pandemic, according to a new report from CBRE.

The real estate firm said the regional vacancy rate for Class A space remained at 6.6% in the second quarter of 2020, and has varied only slightly since the Q2 2018.

The Northern New Jersey/New York City region tightened “notably,” the report found, with vacancy shrinking from 0.9% in Q4 2019 to 0.3% in Q2 2020. The Philadelphia metro area, which includes South Jersey, saw its vacancy rate decline slightly in the quarter after jumping to 5.5% by year-end 2019.

Industrial leasing activity, which has declined slightly in 2020 when compared with 2019, saw momentum grow in the second quarter, with traditional retailers and e-commerce firms showing strong demand, the report found.

Average asking rents, particularly for modern Class A facilities, remain at or near peak levels, especially in popular locations such as the Meadowlands or near Exit 8A of the New Jersey Turnpike, CBRE said.

Construction is also making a comeback from its temporary halt in the second quarter, with nearly 38 million square feet of new product being built as of Q2. Strong preleasing also shows promise, the firm said.