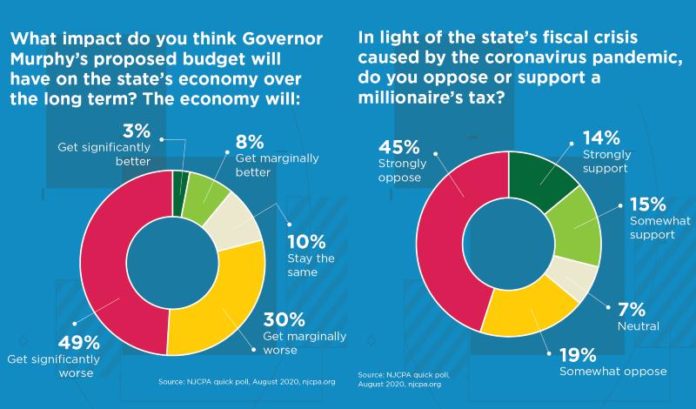 About that $4 billion in new borrowing to offset revenue deficiencies? New Jersey’s CPAs made their views clear: They are not in favor.

More than 60% were either “somewhat opposed” or “strongly opposed.” And more than three out of four felt the proposed budget would make the state’s economy “marginally worse” or “significantly worse” over the long term.

The results come from a survey of 892 CPAs by the New Jersey Society of Certified Public Accountants after Gov. Phil Murphy presented his budget for the state’s 2021 fiscal year on Aug. 25.

Murphy has defended the need for more borrowing to help pay for necessary employees — such as police, firefighters, teachers and health care workers.

He also had one question for those opposed: What’s your plan?

The survey allowed CPAs to offer some suggestions.

Survey respondents said Murphy should skip or decrease the proposed $4.9 billion pension payment this year, as opposed to opting for $4 billion in new borrowing.

In addition, respondents cited various ways to fix the state pension problem, which included paying out a maximum of 40% of the average compensation calculated, based upon the total number of years worked, instead of 70% of the average of the last three years.

NJCPAs also supports the pension reform measures in the “Path to Progress” report issued by the Economic and Fiscal Policy Workgroup and stresses that borrowing should only be undertaken for critically important, one-time expenses, not a deferral in New Jersey’s well-documented imbalance in spending.

In addition to the increased borrowing and $1.25 billion in spending cuts, Murphy also called for new taxes totaling more than $1 billion, which includes an expansion of the millionaire’s tax and a permanent 2.5% surcharge tax on corporations with income over $1 million.

The majority of survey respondents (64%) were either “somewhat opposed” or “strongly opposed” to the expansion of the highest tax rate on those making more than $1 million, noting that revenue sources will move out of state and never return. They instead cited a need for more cost-saving measures, including state workforce reductions and salary decreases.