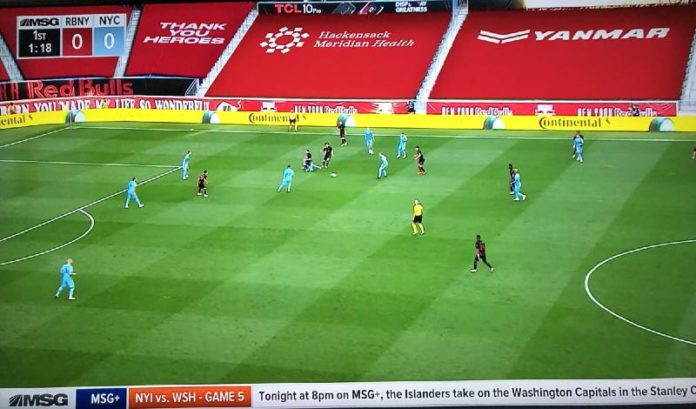 When Major League Soccer returned this summer with its MLS is Back Tournament from a bubble in Orlando, Florida, the league wanted to make sure local markets got part of the action, too. So, it turned to virtual advertising.

The league wasn’t the first to do so — everyone is familiar with ads that appear on backstops in baseball and now on the court for the NBA. In fact, international soccer events have been using such advertising for years.

But it was a first for the MLS. And it went over so well, that the league has allowed local teams to continue the practice on their local broadcasts.

The New York Red Bulls used the platform for the first time Aug. 20. They will use it again Wednesday night, when they broadcast a fanless game against DC United from Red Bull Arena in Harrison.

ROI-NJ recently caught up with Joe Stetson, the chief revenue and marketing officer of the team, to discuss how virtual advertising is changing the broadcast of professional sports, now and potentially in the future.

Here is some of that conversation, edited for space and clarity:

ROI-NJ: Let’s go back to the impetus of this: How did it all start?

Joe Stetson: When the league did its MLS is Back Tournament in the bubble, a major priority was providing value for not only the league partners and national partners, but also give the clubs an opportunity to provide value for their local partners as well, too.

They recognized things obviously are shifting in regard to not having fans, so your normal sponsor activations, your normal sponsor assets were no longer really available. Everybody’s got to be creative and think of new ways. So, they provided 14 virtual spots for advertising during the games.

ROI: How did those spots get handed out — and how was the idea received by the advertisers?

JS: Some were designated for the league and their partners and some were designated for each team. Our sponsors loved it because they were able to get really prominent positions during the broadcast. It was really compelling, not only for our partners that have a national footprint, but even for our local partners that, all of a sudden, were able to get exposure nationally, too.

ROI: How does the technology work?

JS: It’s not as easy as just putting a logo on a broadcast. For our local broadcasts, we decided to work with Brand Brigade, which was familiar to our broadcast partner, MSG, because they do a lot of work with the NHL and Major League Baseball. They came in and spend two days calibrating the production after we purchased tarps to put over the seats that we could use for advertising.

We have to rely on MSG to make sure that the camera angles will make the sponsors visible because, based on league guidelines, they have to be a certain level from the field. So, you really have to work with your virtual advertising and broadcast partners to make sure that they’re meeting the standards.

ROI: How did you select the advertisers — and was this a value add or a new cost?

JS: We leaned on our marketing partnership group, led by Darren Meyer, to really identify who are the right partners that would want to take advantage of it and would be the best fit for this.

We wanted to provide this opportunity to partners that have really engaged with us throughout this year, really worked with us to be creative and finding new ways to activate. Affinity Federal Credit Union, Hackensack Meridian Health, New Jersey Lotto, Provident Bank are just some of the advertisers who are participating.

I don’t want to get into the financials; that is part of our partnership agreements.

ROI: In addition to giving your sponsors a value add, some would say the spots also help the broadcast, as they help cover up the tarped sections of the stadium. That being said, when is it too much? Talk about that balancing act?

JS: It is a balancing act, for sure. But that envelope gets pushed more and more each year. And I think fans have grown to expect it, whether it is advertising on the uniform, both on the chest and now on the sleeves.

Those are two areas we always have to look at: We’re very conscious and sensitive about making sure we’re not doing too much.

ROI: So, we have to ask, what was the reaction from the first game?

JS: We were really happy. And we got some nice feedback from the league and our partners.

ROI: Which leads to the final question: How much more can the team explore the virtual world?

JS: That’s the question: How much of this can we carry forward? How will this change when there are fans back in the stands? Those are issues we’re constantly looking at. But virtual programming goes beyond sponsors.