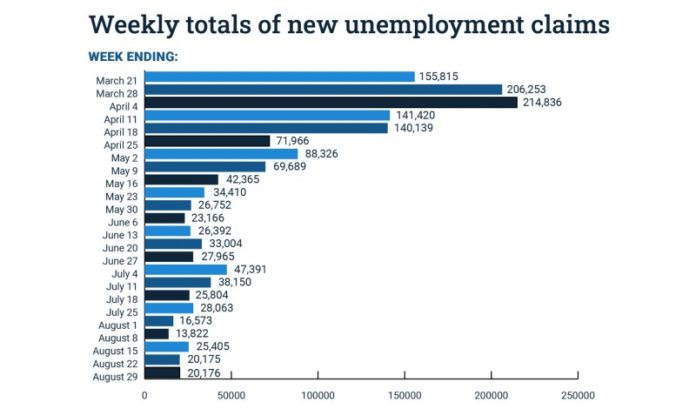 That was about the same number of new claims as were filed the week before, the state said in a news release.

The DOL paid out about $343 million in benefits for the week ending Aug. 29, bringing the total payout of federal and state money since mid-March — when the COVID-19 shutdown slammed the state and nation — to $14.7 billion.

The state said 1.54 million people have applied for unemployment since mid-March, with 1.35 million meeting the requirement for benefits and 96% receiving payment. The average benefit has reached $11,400 per claimant.

“As long as this pandemic continues to show its power over our economy, the Labor Department will continue to pump vital, family-sustaining benefits into the bank accounts of out-of-work New Jerseyans,” Labor Commissioner Robert Asaro-Angelo said in a prepared statement. “While our department is bound by federal laws and regulations that can slow the process, we remain committed to get every penny to every claimant who deserves benefits.”

The U.S. DOL noted that, for the week ending Aug. 22, New Jersey saw the third-largest decrease in claims of any state, down 5,235 from the prior week.