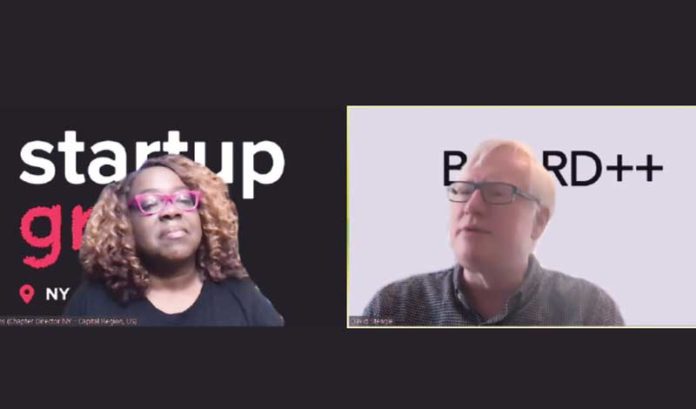 Board++, which was launched at the end of last year, just before the pandemic struck, solves two separate problems, one for corporations and the other for startups, Stengle told E. Patrice Perkins, director of the NY-Capital Region chapter.

The company’s mission is to diversify boards, so founders can get the enriching perspectives of people who do not look like them. According to research, founders make better decisions when they can consult board members from different backgrounds. Board diversification also sends a powerful cultural message to startup employees, investors and customers.

For corporations, Board++ provides a leadership development opportunity and a means of retaining diverse employees who have reached senior management, but have concerns about professional advancement.

“If you are in an underrepresented group — you’re a woman, or person of color, or a veteran, or LGBTQ or just something that isn’t the norm — and you’ve been there a while, you may look up to the next level of management, and often there’s no one that looks like you,” Stengle said.

Board++ sells corporations on the idea that the best leadership development training you can give your people is an opportunity to join a startup board, Stengle said. The company makes money on fees charged to the corporations for executive development.

“When you join a board, you exercise senior executive capabilities that you don’t exercise running a team, or running a budget, or running a P&L (profit and loss) or managing a corporate function,”  he said. “You get experience speaking to power, experience talking about deals and experience making life-or-death decisions for companies. You need a different network than you see in the halls of Corporate America, and all those things make you a stronger executive.”

So, fundamentally, for a big company, Board++ is an executive development program that offers real-world experience, something that’s valued by the participants. Corporations also want to have stronger ties to the startup community, Stengle added.

“It’s really challenging politically and socially for a big company to do a 90%-failure project,” he said. “Whereas, that’s the life of a startup. Everybody’s swinging for the fences.”

Need for diverse points of view

For startups, having diverse points of view in the mix has been proven to boost success and profitability. Unfortunately, startup boards today have extraordinarily little diversity. Some 60-70% of startup boards have no women, Stengle said, and “The numbers for people of color are dismal.” If a startup is a B-corp or a C-corp, it is legally required to have a board. Startup boards are typically made up of the founder, and possibly co-founder, and representatives of the lead investors or the investors themselves. They also have an independent seat that is often filled by someone in an investor’s or the founder’s personal network.

But that doesn’t help the startup succeed, Stengle said.

“You get the most benefit if you can get someone outside those two networks because it brings more new contacts to the business,” he said. “By filling that independent board seat with someone from an underrepresented group, you will get someone that diversifies the board, diversifies the thinking of the board, the experience of the board. It brings in someone from a big company that the startup is trying to sell to, earlier in the cycle.

“And, by filling the independent board seat early, you are actually de-risking the startup and improving its chances of success. You also send a very strong cultural message: that the startup is not strictly a rich white guy club.”

In a conversation after the meeting, Stengle noted that his company is in its nascent stage right now. He had just completed working with his first cohort, which was made up of all women.

“I’ve got one person all the way through, and the startup loves it,” he said. “It’s a slow process, though. It takes months to do the match and bring the introduction. And then it’s like regular candidate search in some ways. I say, ‘I’m going to bring you a super-qualified candidate, but you decide.’”

The members of the first cohort were all senior managers, with an average of over 1,000 people reporting to them. Stengle also noted that there was a networking effect among the cohort members, who came from different companies and were able to speak about their own work situations to other women they may never have met before.

While he believes that Board++ could be a scalable, profitable business, Stengle acknowledged that he is doing this as a way to give back.

“My whole career has been about building enterprise software companies, and I’ve been doing that since 1990,” he said. “And, in 30 years, I’ve never had a woman on my board. I had advisers who were women, but no women (members).”

This is a way to drive change in a positive way, he said.