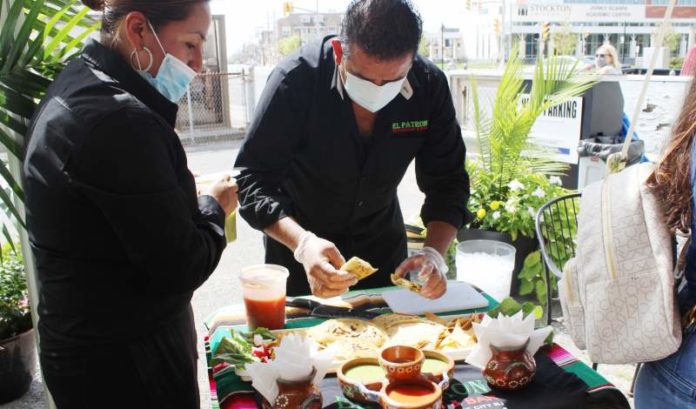 It might not be as famous as the Nathan’s Hot Dog Eating Contest that takes place every Memorial Day. At least, not yet.

Organizers of August’s Best Empanada Challenge in the Chelsea section of Atlantic City hope their event will become an annual celebration.

The friendly monthlong competition, which ended with an awards ceremony on Labor Day, is intended to serve as a celebration of Chelsea — a way to show the Atlantic City neighborhood’s true character as a diverse, vibrant and supportive community, organizers said.

More than 2,000 votes were cast online, with Rincón Catracho, located at 2801 Arctic Ave., maintaining the lead throughout the month and securing the championship trophy.

The husband-and-wife team of Siara Zuniga and Alexis Cano said they were proud and excited to win the honor — and are hoping it will add to what already has been an increase in sales and new customers.

A photo of the couple will be on the Atlantic City Development Corp. billboard at Albany Avenue. The billboard also will include the names of all the participating restaurants: Mexico, Sabor Salvadoreño, Queens, Mr. Taco, El Gran Chalan, El Patron, Lenox Café, Chismosa’s Kitchen at Celebrity Corner and Boom Market Café.

Rincón Catracho, which also won for best presentation, wasn’t the only honoree.

The judges selected Sabor Salvadoreño for best crust and best overall taste, while Mexico was judged to have the best filling.

The organizers, AC Devco and Chelsea Economic Development Corp., had hoped businesses would see an increase in sales. What they got was beyond expectations, they said.

Elizabeth Terenik of AC Devco said the organizers intend to make the competition an annual event.

“The primary goal of the event was to bring attention to the hard-working and well-deserving small businesses that had been hit hard by the pandemic,” she said. “The program truly put a light on the city’s authentic, culturally diverse, neighborhood restaurants, a great asset throughout all of Atlantic City.”

Terenik said supporting local businesses, branding the Chelsea International Food District and celebrating diversity are just a few of the strategies that were put into action by the Best Empanada Challenge.

The strategies, she said, are part of the Chelsea Neighborhood Plan that received extensive public input and was completed in July. If approved by the state, the plan allows AC Devco to apply for up to $1 million per year of tax credit grants.

The celebrity chef judges for the contest said they were inspired and impressed by the presentation and quality of the empanadas, as well as the enthusiasm and commitment of the restaurant owners.

Cookie Till, of Margate’s Steve and Cookie’s, said she appreciated the different ethnic flavors — and the purpose of the event.

“This is about supporting neighborhood businesses,” she said.

Mike Hauke, of Tony Boloney’s, said he ordered takeout from all the restaurants during the month and enjoyed trying new ethnic cuisine, such as Honduran from Rincón Catracho.

“All the owners put their heart and soul into it, and their food was amazing,” he said.

And Pam Green, of the Boys and Girls Club Culinary Program, encouraged the women restaurant owners to keep up the good work.

As the first female executive chef in the city, she said she was happy to see family-owned and -operated businesses, calling them the “strength of the community.”

Chick-fil-A to open location in Linden on Wednesday