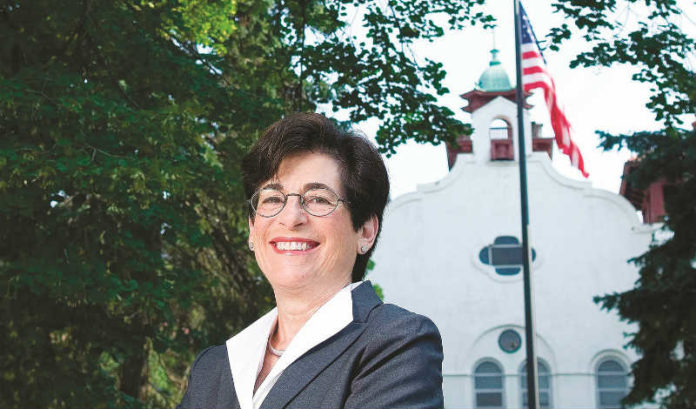 Susan Cole, whose vision and determination helped build Montclair State University into one of the top institutions of higher education in New Jersey, announced Wednesday she intends to retire at the end of the current academic year.

At a time when university presidents average 5-6 years at an institution, Cole will complete her 23rd as head of Montclair State. But, it’s fair to say she has transformed the university many times over since taking the job in the fall of 1998.

Cole has set an example any school president would be honored to match.

Under Cole’s leadership, Montclair State’s enrollment jumped from approximately 12,000 students to 21,000, becoming the second-largest university in New Jersey. That growth included on-campus student housing, which more than doubled during her tenure, increasing to 5,200 beds from 2,300.

And, oh, was there plenty for those students to do and study.

Under her leadership, the university created four new schools and colleges:

It was all part of a building boom that saw the construction of approximately 3 million square feet of academic and performance space, including buildings to house its music and communications schools, as well as the Kasser Theater, home to Peak Performances, a critically acclaimed performing arts series that draws audiences from across the tristate region.

Then, there’s the state-of-the-art facility for the Feliciano School of Business, which has developed new programs, grown its enrollment and added new faculty, earning a place among the nation’s top business schools. And the Feliciano Center for Entrepreneurship and Innovation — which was ahead of its time when founded in 2013.

Cole, who announced her retirement to the staff through a YouTube video, said she is leaving not because she accomplished everything she set out to do, but because, “At some point, I just have to stop.”

The work of developing the university, she said, is never done.

“The university is organic and ever-changing and meant for the ages, not just the decades,” she said. “And, as for me, if I stayed here for another 20 or so years, I would still never accomplish what I came to do, because my dreams and goals for the university keep growing with the university.”

Her dreams and goals were pretty impressive — especially in the sciences.

To support its growth and lay the groundwork for its future development, Montclair State completely rebuilt its energy infrastructure and became one of only a few universities in the nation, and the first in New Jersey, to achieve energy independence with its own microgrid.

As the physical size of the university grew and new programs were added, its existing academic programs also flourished. The College of Humanities and Social Sciences retained its strong commitment to providing a high-quality liberal arts core for all students, and developed an array of new programs that focused on issues related to the child in society and social justice.

Montclair State has enjoyed a longstanding reputation as a leader in the preparation of teachers and educational leaders, and the College of Education and Human Services today continues to be recognized among the strongest colleges of education in the nation.

Her retirement was saluted by both Gov. Phil Murphy and Francis Cuss, chair of the school’s board of trustees.

Brigid Callahan Harrison, the school’s longtime professor of law and political science, said Cole also is being saluted by thousands of first-generation students.

“One thing that is often not mentioned about Susan is that she was a fearless advocate for the neediest students in the state, arguing for fairness in allocating TAG grants,” she told ROI.

Cole was all about providing opportunity.

She helped Montclair State take its place as one of the state’s most successfully diverse institutions, while expanding its degree offerings and earning national and state recognition as a research university. Throughout it all, she insisted that the university keep its focus on its students, providing them with an excellent, yet affordable education to equip them to lead lives of purpose and meaning.

Murphy said the people of New Jersey owe a tremendous debt of gratitude to Cole for her extraordinary contributions to our state.

“She believes deeply in the power of higher education to transform lives and open doors of opportunity,” he said. “Dr. Cole has been a tireless advocate for the students she serves, and I have great respect and admiration for her and wish her nothing but the best as she embarks on this next chapter.”

Other university achievements during Cole’s tenure include:

Harrison said the support and leadership the faculty received from Cole made it a pleasure to work and teach there.

“She has shown such great compassion,” she said. “She has earned the admiration of the faculty, the student body, the administration and the broader community in the state.

“I have learned from watching her lead.”

Harrison said that leadership can best be described this way: “She is a really, really hard worker.”

Those efforts have helped lift Montclair into the top tier of New Jersey schools — and brought Cole numerous accolades around the state, country and even the world.

Despite this, Cole chose to salute others during her announcement.

“The years have been filled with really hard work, and I could never say enough about the quality of the effort and commitment of the whole Montclair State team,” she said. “The university has been able to attract extraordinarily talented faculty, staff and senior administrators. I give them the credit for creating a great university to serve the people of this state and beyond.

“I also give enormous credit to the university’s board of trustees, who believed in the vision and were unfailing in their support over the years, as have been the foundation trustees, and the many individuals who have served on advisory boards and in so many other ways continue to support the work of the university.”