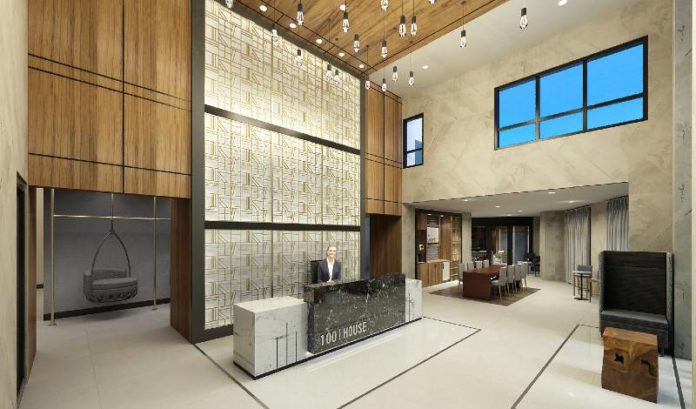 A luxury rental property on the border of Jersey City and Hoboken will start leasing this fall, according to the developers.

BNE Real Estate Group, Hoboken Brownstone Co. and McKinney Properties said in a news release that 100 House will debut with 137 residences in studio, one- and two-bedroom layouts. The five-story property at 100 Hoboken Ave. is the second to be launched by the developers on Jersey City’s northwest border with Hoboken, they said in a news release.

The Marketing Directors, which leased 260 apartments during phase 1 of The Enclave development in six months, has been chosen as 100 House’s exclusive marketing and leasing agent.

“The initial phase of The Enclave achieved immediate leasing success, providing great evidence that Jersey City’s Coles Street corridor has become its hottest new neighborhood,” BNE Partner Jonathan Schwartz said in a prepared statement. “… We’re incredibly excited to introduce another cutting-edge building to the mix with the launch of 100 House.”

Amenities will include a 24-hour concierge, a number of lounges, a fitness center, outdoor sun terrace and more.

“Residents at 100 House will also enjoy shared amenities with The Enclave, which features a rooftop heated pool, private poolside cabanas, fireside seating and more,” Jacqueline Urgo, president of the Marketing Directors, said in a statement. “There’s also complimentary shuttle service to the Hoboken PATH and CitiBike access nearby.”

Rental units start from the $2,300-a-month range, the developers said.

JLL completes lease for engineering firm at Class A building in...