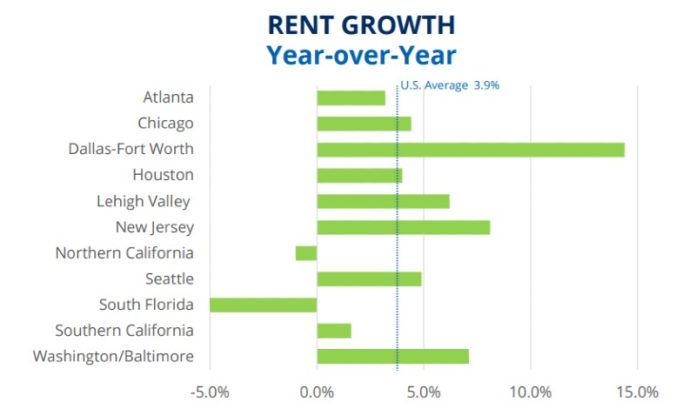 Although the national industrial real estate sector struggled in the first half of 2020 due to COVID-19, strong demand helped New Jersey see above-average results, according to a new report by Transwestern.

The real estate firm’s latest “Elite 11” U.S. industrial markets report found that the average asking rent in the Garden State topped $9 per square foot in 2020, up nearly 70% since the last recession.

“Many sectors of the real estate market have been put on pause since March — but not the industrial real estate sector, which continues to flourish,” research director Matt Dolly said in a prepared statement. “Prior to the pandemic, the core markets led investment activity, and this movement has only intensified in recent months.”

According to Transwestern, the New Jersey market has 746 million square feet of industrial space, ranking it fifth among the locations. It has seen 0.6% inventory growth in the past year, and could see a predicted 1.8% growth going forward.

Rent growth came in at 8.1%, while net absorption was 0.8% year-over-year. The average U.S. rent growth was 3.9%, a mark exceeded by seven of the Elite 11 markets, including New Jersey.

“Core markets offer three primary benefits: large population centers, established infrastructure and historical performance,” Executive Managing Director Walter Byrd said in a statement. “Many investors have capital they are eagerly waiting to deploy in prime assets, which can be tough to come by in the Elite 11 markets.”