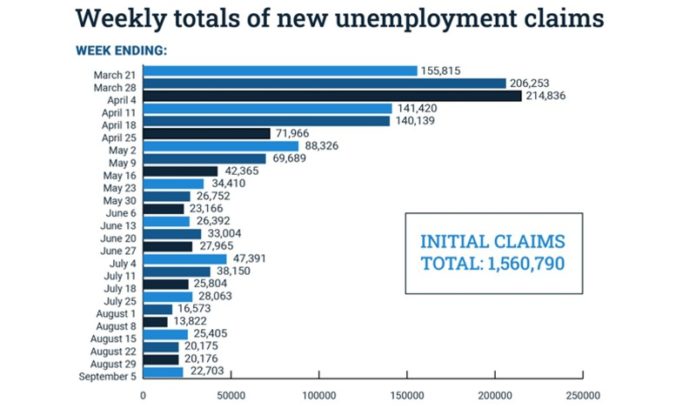 The New Jersey Department of Labor & Workforce Development said unemployment claims grew 12.5% last week from the prior week, as it received 22,703 new claims for the week ending Sept. 5.

For the week ending Sept. 5, the state paid out $298.8 million to eligible claimants, bringing the total since the COVID-19 pandemic shut down the state in mid-March to $14.9 billion in federal and state benefits.

The state said, since mid-March, 1.56 million people have applied for unemployment, with 1.36 million meeting the requirements for benefits and receiving an average of $11,439 per claimant. The state noted that 96% of those eligible have been paid.

“Our teams have persisted through overwhelming demand to get nearly $15 billion in benefits into the hands of our state’s workers and families, but we know this battle is far from one,” Labor Commissioner Robert Asaro-Angelo said in a prepared statement. “The pandemic has forced us all to endure tremendous challenges that extend even beyond employment hardships, and we’re doing everything in our power to bring relief to our workers.”

The U.S. Department of Labor said in its own weekly report that national claims came in at 884,000 for the week ending Sept. 5, unchanged from the revised level for the previous week.

The U.S. (adjusted) unemployment rate was 9.2% for the week ending Aug. 29, up a tick from the previous week’s unrevised rate.