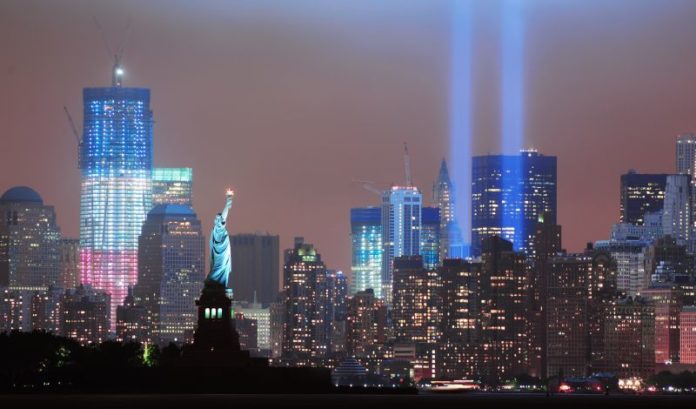 I was laughing at my dad, telling him it was just an accident — telling him not to worry as he watched my young daughters while my husband, Gene, and I were sitting in traffic on the New Jersey Turnpike, making our way to Newark Penn Station.

I told him he was crazy. Then the second plane hit the other tower of the World Trade Center.

Nineteen years later, I still can vividly recall many details of 9/11.

The sun was shining. My oldest daughter, Elizabeth, was in her second week of kindergarten. My daughter Erin was watching Elmo on TV with my father.

I was headed to my job in New York City, where I worked for New York Press. I was one of the thousands of New Jerseyans who commuted into the city each day. And I was determined to get there.

We were on deadline for a big issue, and I insisted that I needed to go into the city. I had an appointment with a business on the corner of Church and Broadway at 10 a.m. — and I didn’t want to miss it. I was naive and stubborn as I boarded a train going into the city. Then, I got a wakeup call.

As we were making our way through the tunnel, word of what was happening started to filter through the cars. You have to remember, news was not immediate then. Many people had cell phones, but no one had a smart phone. Word of mouth was still the rule.

As I was hearing tidbits of the news, I heard a woman, visibly pregnant, let out a blood-curdling scream that I can still hear. Her husband, we soon found out, worked in the Twin Towers.

When that word got around, I saw the people all around me on the train, wiping the tears from their eyes, standing in silence.

Somehow, the existence of the pregnant woman reached the authorities. When we got to Penn Station, she was whisked away by police officers.

The rest of us walked off the train and through Penn Station like zombies, unsure of what to do. When I got to my office, my coworkers already were gathered around a TV, watching the news, sitting there is silence. We were from all different places, and at all different points in our lives — but we had one thing in common: We were all scared. There were hugs and tears. There was concern about our coworkers that hadn’t made it into the office yet.

Then, the panic set in for each of us.

What about our loved ones? Our kids, our husbands and wives, our parents, our friends? There was no phone service. No way to check. What could we do?

A group of us decided to walk to nearby Bellevue Hospital. We were a bunch of salespeople that were never at a loss for words. This time, we walked in silence. As we entered the hospital, we saw the organized chaos and stood in line to give blood. Sadly, it soon became clear that there was not going to be a rush of injured people entering the hospital.

We gave blood and left the hospital. As we walked across town, we passed people covered in debris. No one said a word. I remember everything seemed like a movie without sound.

Communication was difficult. I tried to call Gene and my parents. They were trying to call me. My dad was the first to get through. As I answered the phone, his voice was cracking.

“Lizzie, thank God!” he said. “I have been on my knees since I hung up with you, praying to God to keep us all safe. Please come home as soon as you can.”

He told me that he, my Mom and the girls were at my house. They weren’t putting Elizabeth on the school bus.

My husband was working near the George Washington Bridge. I eventually got through to him and told him that I would meet him in Newark. After a number of hours, a coworker and I were able to get a train to New Jersey. We rode in silence.

There were so many people that I was worried about. Friends that worked in and around the towers, friends that commuted through the towers every day. There was no air traffic, only fighter jets flying over every now and again. No one knew what was happening. Or what was going to happen.

The next days and weeks were filled with more of the same. I went to work every day. It was unlike anything I had ever experienced. There were building evacuations and anthrax scares at our office. I’m sure I had post-traumatic stress disorder.

Threats — real or imagined — were everywhere. I would get on the train and look at my surroundings like I never did before. Was the guy sitting in the seat next to me a terrorist? Was it safe to ride the subway?

It only got worse when you were in the city, where you found people around Penn Station holding pictures of their missing children, spouses, friends and coworkers. It was people like that woman. They were looking for miracles that, sadly, never came.

It wasn’t much better at home. I remember driving around looking for American flags to display. I remember trying to create a sense of normalcy. But these weren’t normal times. I remember driving with my Mom and our neighbor on Route 130 when an Army Jeep passed us. My Mom reached over and beeped my horn. They looked over, and my Mom and our neighbor gave them both a big thumbs-up. Without words, they were saying, “Thank you for protecting us and our families.”

North Brunswick, like all towns, had a ceremony. We went with the kids. There were friends and neighbors, crying together, praying together. I remember Elizabeth smiling over at a little girl. The girl’s parents were there with her two brothers. The mother was very pregnant. I looked at her and immediately thought back to the woman on the train. What happened to her? To her child? To her husband? I’ll never know.

But I think of that woman whenever I see someone who is pregnant.

It’s just one of the ways 9/11 has changed me. But I didn’t realize it back then.

I had trouble sleeping for months after the attacks. I would watch news channels at all hours of the night, hoping for a different outcome that never came.

I couldn’t eat. Every day, I felt sicker and sicker. By Thanksgiving, I was convinced that I had anthrax poisoning.

Finally, I went to the doctor. I hadn’t been poisoned. I was pregnant. And had been for some time. My son Andrew, born in the spring, was with me on 9/11.

Liz Dwyer is sales manager for ROI-NJ. She can be reached at ldwyer@roi-nj.com.

Issues to look for as N.J. athletes and colleges navigate NIL...