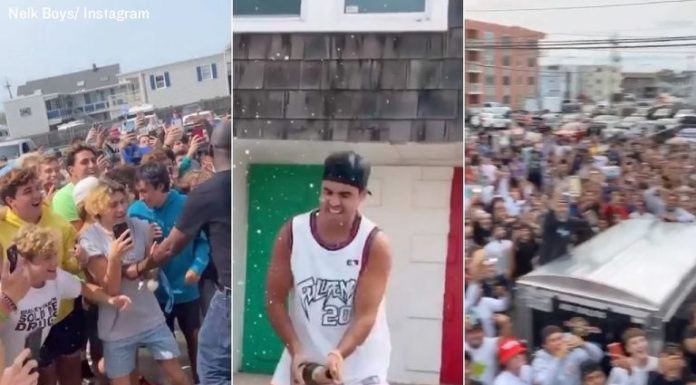 After what was supposed to be a simple website launch ended up encouraging over 1,000 fans to crowd outside of a house in Seaside Heights this past Monday, Gov. Phil Murphy had a message for anyone who attended.

“I urge anyone who was in that crowd to go get tested,” he said. “That kind of gathering is how coronavirus spreads most easily — and just because you’re young and seemingly invincible doesn’t mean you actually are.”

The event was organized by popular YouTube channel the Nelk Boys, who rented out the home where the popular reality show “Jersey Shore” was filmed. After they advertised the event as the launch of a new apparel website, the crowd was soon estimated to be in the thousands, with people not wearing masks or practicing social distancing.

Police from all over the area arrived to help quell the crowd, which was largely dispersed by 9 p.m. The members of the channel were quickly kicked out of the rental property by the owner.

Murphy also expressed concern that the event might have caused a spike in COVID-19 cases and encouraged residents to stay the course and continue the practices put in place over the past six months.

“It will be a couple of weeks before we know whether or not Seaside Heights unwillingly became a coronavirus hotspot because of these knuckleheads,” Murphy said. “Let’s use some common sense for the common good. Let’s stop with the house parties and the irresponsible behavior. Let’s get back to what we know works.”

Murphy reported an additional 447 positive test results throughout the state. Since the first case of COVID-19 was reported in New Jersey on March 4, there have been a cumulative total of 197,792 positive cases.

There were also nine more deaths reported, bringing the confirmed death total for the state to 14,263. The probable deaths increased by two since last week, which puts the total at 1,791.

Out of all the deaths reported Wednesday, seven occurred over the past four days. There were an additional 13 deaths reported in hospitals across the state, but they have not yet been lab-confirmed to be COVID-19-related.

The governor also addressed the message put out by New Jersey Secretary of State Tahesha Way on Tuesday regarding election mailers received recently by many residents.

The mailer, which is a broad-based mail piece sent to many registered voters across the country, included reminders to request a mail-in ballot, to add postage to the ballot and to return it by mail promptly. Murphy reiterated Way’s message that, although helpful, the mailer does not contain information specific to New Jersey’s election.

“First, you do not need to request a vote-by-mail ballot — one will be sent directly to you,” Murphy said. “Second, you do not need to worry about return postage for your ballot — the ballot you receive will include a return-postage-paid envelope. And, third, you don’t even need to use the Postal Service to return your ballot.”

Murphy then went on to explain options for residents when it comes to voting in November, which includes dropping the mail-in ballot in a secure drop box that will be set up in every county, handing the ballot to a poll worker at a local polling location, or voting in person on Election Day using a paper ballot.

“We have done everything possible to make voting easier and safer, given the challenges we are facing from this pandemic,” Murphy said.

The deadline to register to vote is Oct. 13 and can be done online at elections.nj.gov.

Murphy said the statewide response rate for the 2020 census was continuing to grow in record territory.

“Because of all of you who have proactively responded to the 2020 census, New Jersey’s current self-response rate of 68.1% is the highest we’ve achieved in the past four censuses, going back to 1990,” Murphy said. “Our statewide response rate is up to over 92%.”

The deadline to be counted in the census is Sept. 30. New Jersey already has reported record-setting response rates in almost every single county. Residents can visit 2020Census.gov to self-report and get counted.

Murphy on the Big Ten’s decision to resume football in October:

“I want to see Rutgers (football) because I think they’ve got an incredibly exciting program at the moment — I can’t say enough good things about that. But it has to be done safely and it has to be done right. … (Rutgers) reserves the right to address that in whatever way they need to, and if there’s anything we need to do to line up with the proposals, we will do that. … Who doesn’t want to get back to seeing football? Count me at the top of that list.”