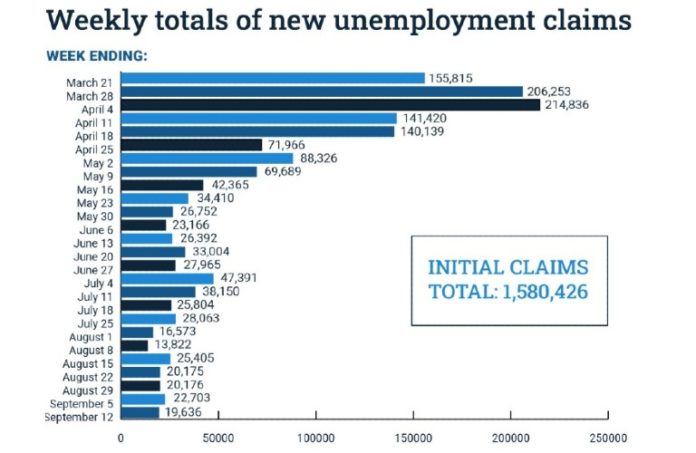 New Jersey’s weekly unemployment claims crossed another threshold last week — but, this time, it’s a good one, as the number of initial claims dropped below the 20,000 mark for the first time since early August.

For the week ending Sept. 12, the Department of Labor & Workforce Development received 19,636 claims, down nearly 14% from the prior week and the fewest new applications since the week ending Aug. 8, it said in a news release.

The DOL paid out $310 million to eligible claimants for the week, bringing the total federal and state benefit payouts since mid-March to $15.4 billion.

“We’re grateful to see more New Jerseyans returning to work, but we are also keenly aware of how many employees and small business owners remain unemployed, often for the first time in their lives,” Commissioner Robert Asaro-Angelo said in a prepared statement. “It’s these workers — who have depleted their savings, had to borrow money or have fallen behind on their bills — we are laser-focused on getting the most money, as quickly as possible.”

The department said it expects to have programming in place next month to distribute the additional $300 a week from a federal FEMA grant. New Jersey has been approved for five weeks’ worth of these benefits and has applied for a sixth.

The unadjusted unemployment rate was 8.4% during the week ending Sept. 5, the U.S. Department of Labor said.