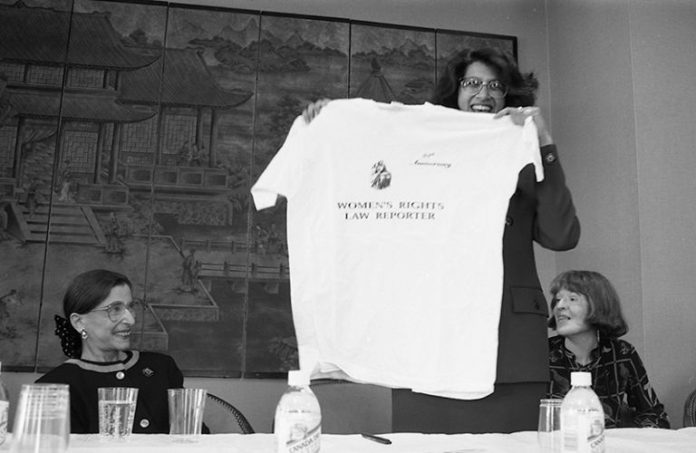 “She is a big part of the legacy,” Lopez told ROI-NJ. “I think she really reflects some of the core values of this institution, the values of giving voice to the voiceless.”

Ginsburg, who taught at Rutgers from 1963-72, died Friday at age 87 after lengthy bouts with cancer.

Her passing seems certain to cause a political firestorm over the timing of the selection of her replacement during a presidential election year.

But, there is no debating this: Ginsburg was a champion of the underserved — both women and all genders from minority communities. And a lot of her principles, ideas that helped make her a cultural icon late in life, started when she was a young law professor at Rutgers.

She has said as much herself.

In a video celebrating the 250th anniversary of Rutgers in 2016, Ginsburg talked of how female law students at Rutgers inspired her to become a champion of gender issues.

“In 1969, several students asked if the school could offer a seminar on women and the law,” she said. “I headed to the library; there was precious little about women’s place in a world where all the doers and actors were male. Rutgers students sparked my interest and aided in charting the course I then pursued.

“Less than three years after starting the seminar, I was arguing gender discrimination cases before the Supreme Court.”

Ginsburg was the first adviser of the Women’s Rights Law Reporter, which began in 1970. It was a groundbreaking publication — and Rutgers was the logical place for its founding. In 1971, a year in which women struggled to get a credit card and could be fired for getting pregnant, more than 40% of incoming law students at Rutgers were women.

Ginsburg moved on to Columbia Law School in 1973, but her legacy at Rutgers remains strong.

Lopez said most incoming students know about Ginsburg — as well as other famed graduates, such as U.S. Sen. Bob Menendez (D-N.J.).

Ginsburg, however, was at the university during a period of change that is still felt today. Not only were women’s rights moving to the forefront, the rights of all underserved communities were the main topic in Newark.

“I think that’s a central part of the legacy of the law school,” Lopez said. “In 1967, after the civil unrest in Newark, the law school really revamped itself here and really made a commitment to kind of reflect the broader community and reflect the rich diversity of the country.

“I think that she’s part of the broader tapestry and story of Rutgers Law School that attracts a lot of the students,” he said. “In a year when we’re going through a national reckoning on structural racism, I know that many students are here because of that — because they know that this law school has made a historical commitment in that space.

“And not just only talk the talk, but to walk the walk.”

Kimberly Mutcherson, the dean of Rutgers Law School-Camden, said Ginsburg’s legacy is felt there, too.

Mutcherson, an expert in women’s reproductive rights, said she talks about Ginsburg in her classes frequently.

“Students definitely understand her as somebody, like them, who is Rutgers-affiliated and this incredible warrior for justice,” she said. “It’s nice that we can remind them that they are associated with her.”

Mutcherson said the presence of Ginsburg — as well as the presence of U.S. Sen. Elizabeth Warren (D-Mass.), a prominent progressive politician who is a graduate of Rutgers Law School — are examples that Rutgers is the place of opportunity for all.

“That’s one of the legacies of Justice Ginsburg’s relationship with Rutgers Law School.”

“Through the years, Rutgers has remained steadfast to its commitment to diversity, advancing opportunities for people long left out to aspire and achieve,” she said in the video.