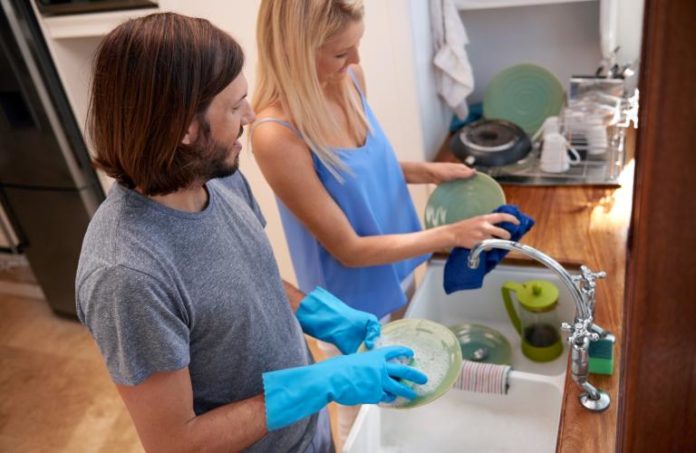 The premise seemed obvious. When the state went on lockdown and working parents not only had to work at home, but care for their children at the same time, the general consensus was that the woman’s job — and her lifestyle — would take the bigger hit.

“We thought women were going to get screwed in all of this,” Kristina Durante said.

Durante, the director of research at the Center for Women in Business at Rutgers Business School, and her colleagues were stunned to learn this wasn’t the case. In fact, many women in their study reported they had a higher job satisfaction than they did in pre-pandemic times.

This satisfaction, however, was tied to one key factor: How much their male partners helped around the house and with the kids.

“We found that men’s increased contributions at home have a positive influence on women’s job satisfaction and productivity,” Durante said. “When dads play a bigger role in child care and doing routine housework, it puts both parents in a better position to succeed at work.”

Rutgers researchers conducted a national online survey of more than 1,500 working adults, including 920 living with a partner of the opposite gender, between April 29-May 15.

Durante, who authored the study along with Yana van der Meulen Rodgers, Lisa Kaplowitz, Elaine Zundl and Seveincqul Ulu, said the group expected an opposite outcome.

“This was a big surprise to us,” she said.

Durante said it’s too early to draw definitive conclusions. The study was taken right before the state went on lockdown. There are plans to do a second survey to see if these findings hold.

Ultimately, those results may not be as important. Durante said she hopes the study calls into question the usual societal norms around work and home. That would have real impact.

Durante said men, women and the companies they work for need to understand COVID-19 may have permanently altered the work-life balance paradigm so many have been talking about in recent years.

She feels the pandemic has made men understand just how much unpaid labor women have to do at home.

“Men, who still are the majority of the leadership teams at companies, are seeing this firsthand,” she said. “Some for the first time.”

Durante hopes this realization will help reduce — or eliminate — the stigma many still feel about balancing work life and home life. But this will only come, she said, when men realize the impact this stigma has on women. And how much men can help.

It’s not enough to simply give women more time at home, Durante said. The study showed having their partner share ownership and responsibility was even more important.

The study made a number of recommendations:

The percent of men who devoted at least five hours a day to household chores increased from 11% prior to the pandemic to 20% during the lockdown. For women, the number jumped from 15% to 28%.

And the study showed this helped both parents be more productive — even more than workers without children, Durante said.

The RBS analysis showed that 30% of working parents reported an increase in productivity after the pandemic hit — versus 21% of people without children.

“We thought it would be completely doom and gloom,” Durante said. “It wasn’t. In fact, there was this bright spot.

“The more we can build off of this momentum of men realizing all that goes into running a household — because, now, they’re contributing — the more this could go a long way to changing the social norm around who does what at home.”

Results of the study