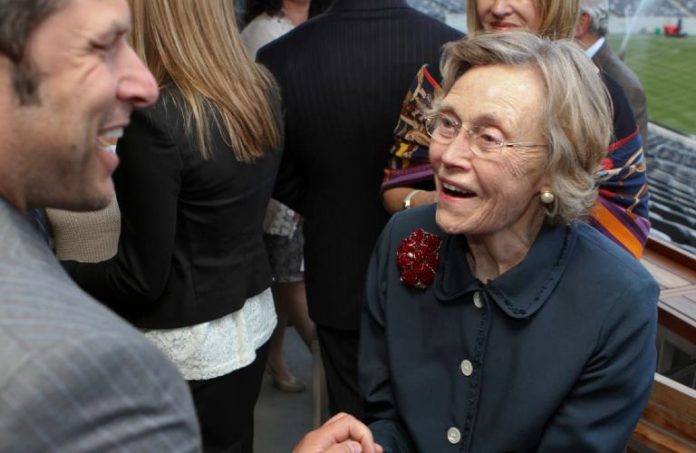 Betty Wold Johnson, the matriarch of Johnson & Johnson, was an extraordinary philanthropist, humanitarian and patron of the arts.

She also was a big science buff.

Monday night, at the annual Liberty Science Center Genius Gala, it was announced that Johnson had bequeathed $5 million to LSC. She passed away in May at the age of 99.

LSC CEO Paul Hoffman said her gift will be used to renovate LSC’s 163-foot-tall pyramidal tower. Hoffman said the donation will make the tower one of the most spectacular learning and event spaces in the metropolitan area.

But Hoffman really wanted to talk about how Johnson maintained an interest in astronomy.

“She followed developments in modern cosmology,” he said. “Everything about black holes, I learned, delighted her. I fondly remember her asking me to read aloud a passage from one of Carl Sagan’s books. She greatly admired Sagan, but never met him, and she enjoyed my telling her stories about what he was like in person.”

Upon completion in 2022, the structure, which is being renamed after her husband as the Robert Wood Johnson III Tower, will be one of the most dramatic learning and event spaces in the New Jersey-New York-Connecticut region, with its stunning 360-degree views of Jersey City, Lower Manhattan, Ellis Island, the Statue of Liberty and the Verrazzano-Narrows Bridge, Hoffman said.

Thanks to the stunning views, the tower always has been a dramatic special event venue.

While the newly renovated space will still be great for social and corporate events, the goal is to transform the existing top floor into the LSC Tower Observatory, a place where K-12 students can make atmospheric and solar observations by day and track the moon, bright stars and planets by night. Biology classes may observe the flight patterns of migratory birds from this perch and New Jersey families might use telescopes to learn about the night sky together.

To do so requires the addition of several new features and amenities. The solution is to make the existing observation area a duplex by adding a second floor below the existing one. The new lower floor will house a restroom, kitchenette and a storage closet for telescopes and educational materials, as well as a second, smaller classroom lab.

All of this will happen because of Johnson.

“Mrs. Johnson was an extraordinary woman whom I was fortunate to spend time with,” Hoffman said. “She visited LSC for the first time when she was in her mid-90s, after she heard that LSC was building the largest planetarium in the Western Hemisphere. Her assistant advised us that the visit would be strictly limited to an hour and would be confined to my office because she did not have the strength to walk around the center.”

After a series of scheduling issues, she finally made it to LSC — and that one hour morphed into a second hour and a tour of the entire center.

“She loved our naked mole rats and cotton-top tamarins,” Hoffman said. “Later, she told me that, while she had always expected LSC to be a great place for children, she was pleasantly surprised to discover that it was also a great place for adults.”

Incredibly, Hoffman said the gift to LSC was not Johnson’s first. As part of LSC’s 25th anniversary campaign in 2018, she made her first $5 million gift. Johnson, however, was not looking for attention.

“(She) asked that it be used for non-glamorous facility needs, like refurbishing bathrooms and plugging leaking roofs,” Hoffman said. “Amazing.”

The new security: Banks focus on cyber world, not vaults