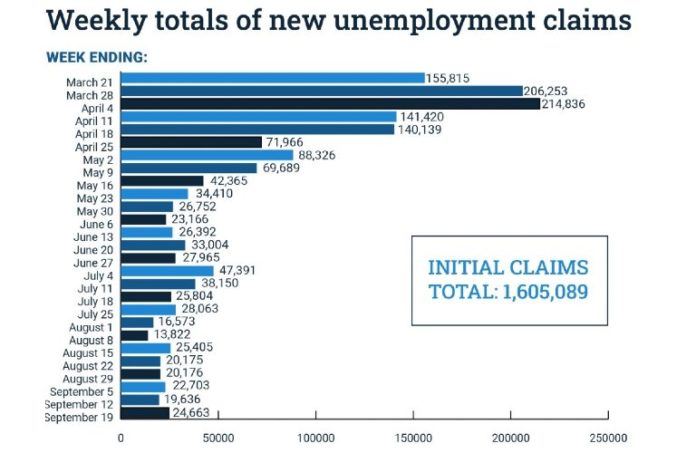 After a week when unemployment claims slipped below the 20,000 mark in New Jersey, they jumped back up 25% during the week ended Sept. 19, according to the state Department of Labor & Workforce Development.

Initial unemployment claims for the week came in at 24,663, up from 19,636 the week before, and bringing the total number of workers seeking jobless benefits to more than 1.6 million since the COVID-19-related shutdown of the economy began six months ago.

The DOL has distributed $15.6 billion in federal and state benefits during the pandemic, including $286 million last week.

“New Jersey workers continue to struggle with the weight of unemployment and underemployment, and the accompanying financial worries of not having a job,” Labor Commissioner Robert Asaro-Angelo said in a prepared statement. “The Labor Department staff knows the difficulties our customers are facing, so they work hard every day to resolve as many cases and answer as many questions as possible.”

The state said 1.4 million people met the requirements for benefits, and 96% have received payment.

Nationally, the figure for seasonally adjusted unemployment claims was 870,000 for the week ending Sept. 19, up 4,000 from the previous week’s revised level.

The unemployment rate for the week ending Sept. 12 was 8.6%, down 0.1 percentage point from the week earlier.