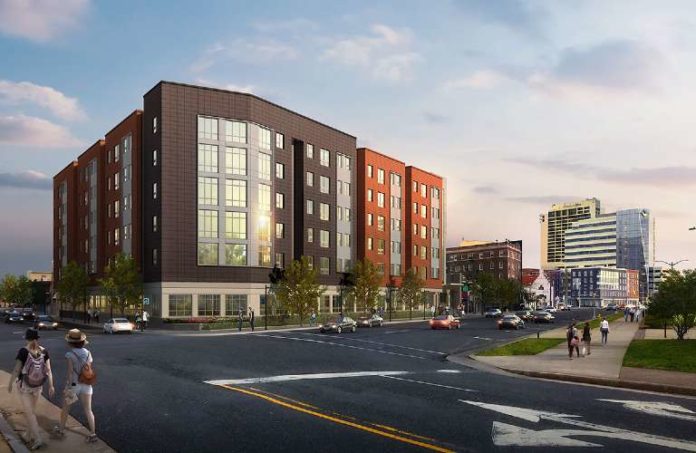 Stockton University will break ground for a new residence hall on its Atlantic City campus on Oct. 14, the Galloway-based college announced this week.

The new dormitory will be built in the University District, at the site of the Eldredge Building at Atlantic and South Providence avenues, across from O’Donnell Memorial Park. The ceremony will take place at the park, with Gov. Phil Murphy and Senate President Steve Sweeney (D-West Deptford) scheduled to attend.

When completed, the building will total 135,000 square feet, with 416 beds in apartment-style units, plus amenities including a lounge, meeting room, laundry and more.

“We thank Gov. Phil Murphy and the Legislature for recognizing and providing the support Stockton needs to operate and expand our Atlantic City campus,” President Harvey Kesselman said in a prepared statement. “It is more important than ever to create a more diversified economy in Atlantic City. The new residence hall will give even more students the chance to live, learn and earn in Atlantic City.”

The construction will be a public-private partnership with the Atlantic City Development Corp., which developed the first phase of the Gateway Initiative that included the Stockton Atlantic City campus, as well as South Jersey Gas headquarters and AtlantiCare Urgent Care. The new dorm will be part of Phase II, the school noted.

“We are thrilled to be able to move forward with this project as part of the Gateway Initiative,” AC Devco President Chris Paladino said in a statement. “This Phase II investment will join South Jersey Gas and AtlantiCare to further enhance the Chelsea neighborhood.”

The groundbreaking had initially been scheduled for March, but was delayed due to the COVID-19 pandemic. The project is expected to be completed in fall 2023.