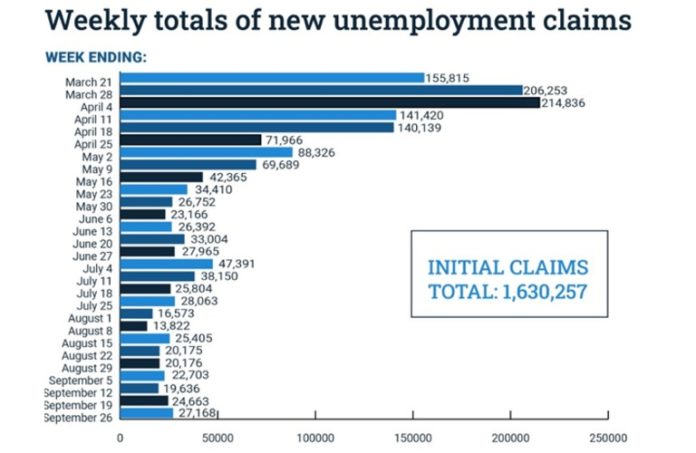 Claims rose 10%, to 27,168, in the week ending Sept. 26, the DOL said in its weekly news release. It said the increase is primarily in claims under the Pandemic Unemployment Assistance benefit, which helps workers who are ineligible for regular unemployment. Claims had risen 25% in the week ending Sept. 19, also primarily due to PUA claims, it said.

“Newly laid-off workers are anxious to know whether they are eligible for benefits and how much they will receive, so we are constantly improving technology and adding applications to get them answers,” Labor Commissioner Robert Asaro-Angelo said in a prepared statement. “Recent innovations by our (information technology) team have enabled us to move thousands of appointments online and shave several weeks off the wait time to resolve certain complex claims.”

More than 1.6 million New Jersey workers have sought unemployment benefits since the start of the pandemic more than six months ago. The state said 1.4 million have met the requirements for eligibility, with 96% receiving payment, and the average claimant receiving $11,808. The DOL has distributed $15.9 billion in federal and state benefits to workers, including $288 million for the week ending Sept. 26.

Nationally, 837,000 people applied for unemployment in the week ending Sept. 26, according to the U.S. Department of Labor’s seasonally adjusted figure. That was down 36,000 from the previous week’s revised level. The unemployment rate came in at 8.1% for the week ending Sept. 19, down 0.6 points from the previous week’s revised rate.

Newell, Quest finish up unit sales, while SB One wraps up...