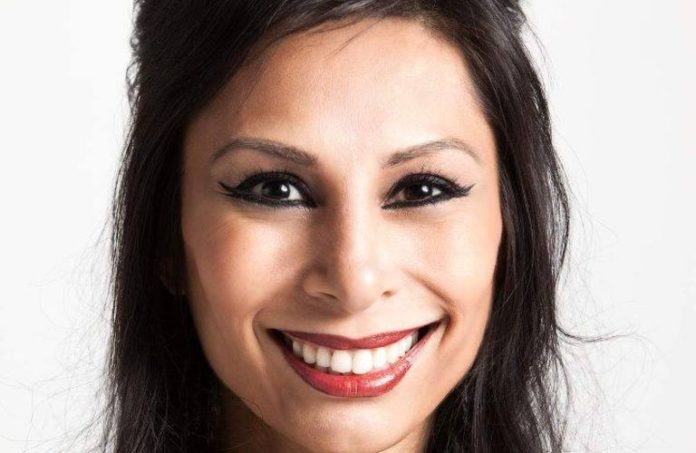 Geeta Chopra makes it clear from the outset: She’s a South Asian woman; she’s also a Republican and a Christian.

She’s a true believer who’s sure she’s on a path to being a mainstream media personality at a conservative-slanted media outlet, such as One America News Network or Fox News.

And the confidence she exudes might just make you a believer in that, too.

She’s hoping her steppingstone is the eponymous “The Geeta Chopra Show,” on Princeton Community Television. Along with that lifestyle discussion program, she also hosts a talk show more in line with the mainstream news slot she’s aspiring to, interviewing local politicians on a program called “We the People.”

“This is my calling and what I’ve always wanted to do,” she said of her career in broadcast television.

Chopra formerly owned the now-closed Johnny Rockets in the Quaker Bridge Mall, not too far from the community television studio she’s now trying to make a name for herself in. She ran that franchise business with her business partner and brother, Vijay Chopra. Before that, she tried her hand at the real estate market, investing in properties and negotiating leases.

Along the way, Chopra made a formative conversion to Christianity following her Hindu upbringing. She also became an outspoken conservative, and is upfront today about her unwavering support for President Donald Trump.

“And I think that has sparked a lot of attention, controversy and interest,” she said. “I am who I am. I won’t go out of my way to offend people on my show, but I’m pretty clear about what my opinion is and what I believe in.”

Her immigrant parents have been supportive of her personal convictions, she said. Not so for all others in the South Asian community — among Asian Americans, while there is a rift between political perspectives, Indian voters are the country’s most Democratic-leaning Asian demographic, according to a survey from polling analysis group FiveThirtyEight.

Chopra, who has written opinion pieces for publications such as the Indian American news website American Kahani that espouse her conservative views, realizes she’s a “rare breed,” if not a pariah among South Asians.

“Some don’t seem to know what to think about it, so they’re polite,” Chopra said. “Deep down, I expect people might think, ‘What happened to her?’ or think I’m some sort of traitor. I don’t know what they think, and I really don’t let it bother me.”

On her newer talk show, “We the People,” Chopra has chatted about politics and constitutional issues with local leaders such as state Sen. Joe Pennacchio (R-Montville) and Assemblywoman Holly Schepisi (R-Westwood).

In the age of COVID-19, she’s had to host her talk show with these political figures and other personalities remotely.

“That’s actually been a blessing, and I believe COVID-19 won’t impact me, which I know is a bold statement to make,” she said. “But, it has really opened up doors. Previously, I had to get people to come to the studio, and now we can do it all with Zoom, meaning people from everywhere are more willing and I can even do international interviews.”

She claims her viewership numbers are rising during the pandemic. However, the public access station her shows air on, the nonprofit Princeton Community Television, is facing an uncertain future after the township of Princeton declined to renew the beloved community station’s funding this year.

Even so, Chopra believes she’s making a strong case for a mainstream debut. As for when that might happen …

“Hopefully, soon,” she said, adding that, “Whenever I’m ready for it, an opportunity will be revealed to me.”