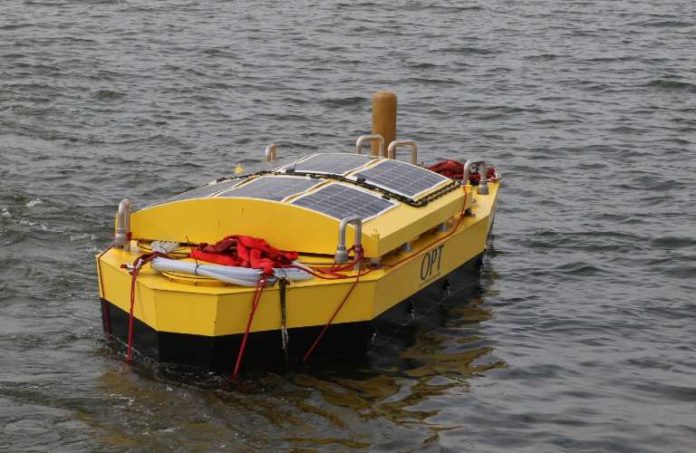 As evidenced by the countless maritime puns in the media decrying the failing business model of a once-promising green energy innovation a few years ago, Ocean Power Technologies looked all but stranded at sea.

The company’s prospects came into question around 2014, when the commercial viability of “wave farms” that could carry ocean-harnessed energy back into the grid proved untenable. The company was described as sinking, drowning and even “waving goodbye” in headlines.

Today, the tides (and the titles) have changed.

Under the direction of George Kirby, the CEO who stepped in during that tumultuous time for the business, the wave energy conversion device made by this local company, named the PowerBuoy, is taking on a new life.

Kirby admits the company’s initial mission of creating scaled-up, grid-connected energy systems out in the ocean marked a technological milestone — but not at all a commercial one. That’s why the company pivoted into autonomous power systems that wouldn’t fuel power grids, but instead keep power supplied to niche offshore applications.

The Monroe Township-based company’s latest devices are like ocean-deployed, floating batteries that recharge themselves with the motion of waves. Instead of bringing that power to land, the buoys use the power for on-board monitoring or communications systems or equipment located underwater.

“It’s really a physical piece of real estate sitting on the ocean,” Kirby said. “You can anchor it to the sea floor, and now put payloads on top powered by the buoy, or on the seabed if you have equipment there.”

There are still not many companies like Ocean Power Technologies, and even fewer competitors applying this energy technology for the market it’s going after now: maritime security and homeland defense.

“Governments are finding it very attractive to load radar, sonar, optical cameras, sensors and other equipment onto these devices in remote parts of the ocean to keep tabs on specific areas,” Kirby said.

Innocuous as they may look, these ocean-powered buoys can carry equipment that can catch human trafficking, the narcotics trade, illegal fishing activities and illegal border crossings. It’s even capable of helping power tools used for detecting and tracking submarines.

Just off the coast of New Jersey, the company designed and manufactured a system used in coastal security and maritime surveillance for the U.S. Navy, referred to as the Littoral Expeditionary Autonomous PowerBuoy, or LEAP, program.

The company’s devices have sailed in a couple other directions: offshore oil and gas operations, aquaculture and oceanographic data sampling.

“Offshore oil and gas exploration in particular has had great growth recently,” he said. “And these oil and gas industries recognize they need to create their own sustainable future by adopting renewable energy (such as wave energy) into their operations.”

Kirby points to a U.S. Department of Energy report from last year that outlined the increasing demand for ocean-derived energy and the emerging “blue economy” as a sign that there’s a new wave of interest in these solutions.

“That program could be very important to us,” he said. “There’s a big place for us in enabling development of offshore wind farms in providing data whether it’s subsea data or wind data back to developers before and during build-outs, but also helping once they’re already operational by providing data back to operation centers.”

In the meantime, like most companies, Ocean Power Technologies had some impact from the local spread of COVID-19, but speaking to global customers, particularly those in Italy, helped prepare them for it maybe more than most.

In any case, Kirby said it’s not getting in the way of the company’s future opportunities — and, hopefully, a more positive stream of ocean-related word play in the press.

Jersey City to invest $19M on energy infrastructure, including construction of...