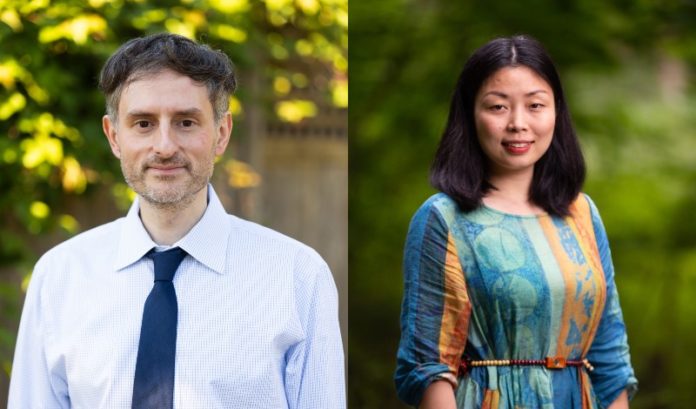 Seyedsayamdost and Wang are among 21 scientists, artists and scholars across the country who each will receive $625,000 in unrestricted grants over a five-year period from the John D. and Catherine T. MacArthur Foundation.

Fellowships are awarded annually to talented individuals in a variety of fields who have shown extraordinary originality in and dedication to their creative pursuits.

They are better known as ‘Genius’ grants — and are among the most prestigious private grants in the nation.

Seyedsayamdost, 41, was honored for his investigations into the biosynthesis of novel molecules with therapeutic properties, and for promoting the discovery of new antibiotics.

As new infectious diseases emerge and pathogenic bacteria develop resistance to our current arsenal of antibiotics, Seyedsayamdost’s research is said to be expanding the toolbox available to synthetic organic chemists and opening up access to a trove of previously unknown therapies.

“It’s surreal,” he said in a release from the university. “I’m still in disbelief. When the foundation called, I asked if the decision was final because I thought I might have to go through several more steps.”

Wang, 34, is a Chinese-born American filmmaker.

Her debut film Hooligan Sparrow premiered at Sundance Film Festival in 2016 and was shortlisted for the Academy Award for Best Documentary Feature in 2017. Her second film, I Am Another You, premiered at SXSW Film Festival in 2017 and won two special jury awards, and her third film, One Child Nation, won the Grand Jury Prize for Documentary Feature at the 2019 Sundance Film Festival. Wang was the recipient of a 2021 Vilcek Prize for Creative Promise in Filmmaking, from the Vilcek Foundation.

According to her Wikipedia page, Wang was born on a small, rural farming village in 1985 in Jiangxi Province, China. When she was 12, her father died, and she was forced to drop out of school to work so she could support her family. Wang’s family could not afford to send her to secondary education. Instead, she enrolled herself in a vocational school and eventually started working as a teacher for primary school-age children.

With several years of work experience under her belt, Wang studied English Literature at a local University’s Continuing Education Program. After that, she was granted a full fellowship from Shanghai University while enrolled in a graduate program for English Language and Literature. Later, she became interested in film and went back to school to study it. She studied communication at Ohio University and holds a master’s degree in documentary from New York University‘s journalism school.

Perhaps the most unusual aspect of the Genius grants is that the honorees are unaware they are being considered.

Here is a complete list of all the honorees.

MacArthur Fellows are nominated anonymously by leaders in their respective fields and considered by an anonymous selection committee. Fellows learn of their selection only when they receive a call from the MacArthur Foundation just before the public announcement.

That certainly was the case with Seyedsayamdost.

“I didn’t even know I was being considered, or that I had been nominated,” he said.

When he found out he was being honored, Seyedsayamdost said he was stunned.

“Initially, I told no one,” he said. “I just sat in my office and didn’t know what to do with the information. And a couple hours after our phone call, the email came in from the foundation and I thought, ‘OK, now I can believe it.’ ”

“Mo Seyedsayamdost’s groundbreaking work is transforming the landscape of antibiotic development,” he said. “His discoveries exemplify Princeton’s commitment to research ‘in the nation’s service and the service of humanity,’ demonstrating how science can help society respond to its most pressing problems. All of us at Princeton applaud his selection as a MacArthur Fellow.”

Gregory Scholes, the William S. Tod Professor of Chemistry and department chair, shared in the excitement.

“Mo’s research is creative and exciting, and therefore a splendid fit with the spirit of the MacArthur Foundation,” he said. “We are all very excited that he has been awarded this fellowship and look forward to seeing how it enables Mo’s next discoveries.”

Rutgers MBA ranked No. 1 in Northeast for job placement