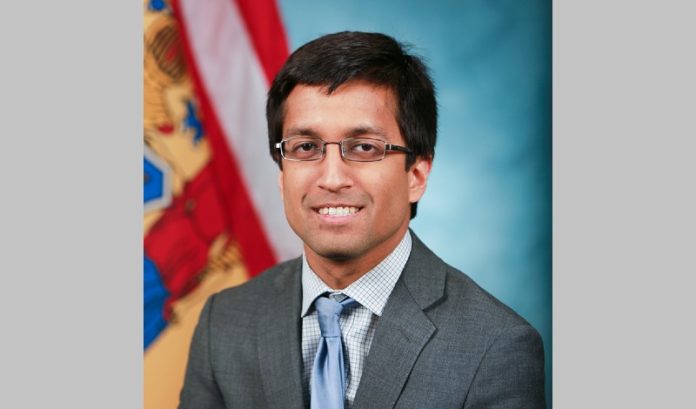 Gov. Phil Murphy announced on Friday that Parimal Garg, the current deputy chief counsel to the governor, will be named his next chief counsel.

Current Chief Counsel Matt Patkin will depart from the governor’s office later this month to pursue a job in the private sector.

“I’ve relied on Parimal’s counsel for more than four years, and I consider him one of the sharpest legal minds in New Jersey,” Murphy said. “As we continue to manage the challenging issues presented by the COVID-19 pandemic and economic crisis, I know Parimal will continue to provide the invaluable counsel he’s brought as an integral member of my senior team.”

Garg has served as Murphy’s deputy chief counsel since January 2018. Previously, he was the senior policy advisor during Murphy’s gubernatorial campaign. Before that, he was a clerk for New Jersey Supreme Court Chief Justice Stuart Rabner. He also worked as an attorney at Paul, Weiss, Rifkind, Wharton & Garrison LLP.

“For more than four years, I have had the honor of working side by side with Parimal as he has tirelessly fought to make our state stronger and fairer,” Platkin said. “His unique combination of integrity, intellect, passion, and empathy make him a terrific choice to serve in the critical role of chief counsel. He has been integral to the Murphy administration’s success to date, and I look forward to many future accomplishments under his leadership.”

.@parimalgarg possesses a unique blend of integrity, intellect, passion, and empathy. I have seen his talent and passion firsthand, and I know @GovMurphy and our state are in great hands. I look forward to many future accomplishments for the 9m residents who call this state home. https://t.co/tXydbRBgvh

Guillermo Artiles, the chair of the government affairs practice at McCarter & English — and one of the original six lawyers in Murphy’s office — also saluted the decision.

Artiles, as an associated counsel, worked in under Garg, who was then deputy counsel.

“There since day one, he and former chief counsel Matt Platkin worked hand in hand on all of the governor’s bold initiatives,” Artiles said. “He’s a great man who will continue to provide good counsel to the governor and the entire administration.”

“I’m deeply honored to continue serving Governor Murphy as he works to protect New Jersey from the worst public health crisis in a century and build a stronger and fairer state for all 9 million residents,” Garg said. “I am especially grateful to Chief Counsel Matt Platkin for the standard of excellence and integrity that he has brought to the job every day, and I look forward to working alongside the rest of the team on behalf of the people of New Jersey.”