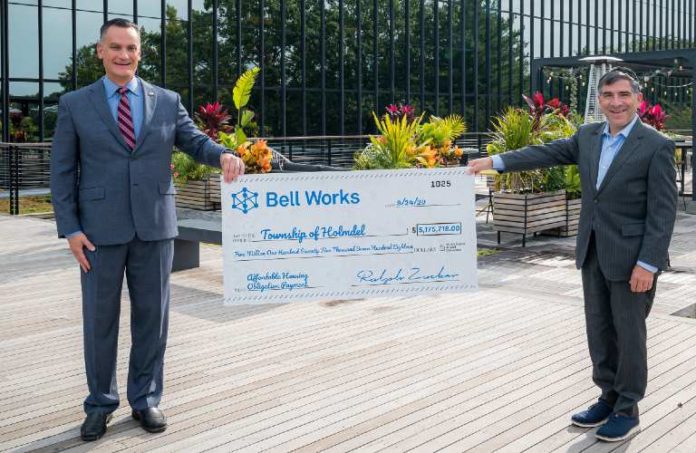 Somerset Development fulfilled its redevelopment agreement with Holmdel tied to the Bell Works metroburb project, presenting the township with more than $5 million in support of its affordable housing obligation.

The Holmdel-based developer turned the 2 million-square-foot Bell Laboratories facility into Bell Works New Jersey, which has more than 1 million square feet of office space and is home to more than 70 companies and thousands of workers.

“When we revealed our plans to revitalize the historic Bell Labs building, we were frequently met with skepticism about what many thought was an overly ambitious initiative,” Zucker said in a prepared statement. “However, Holmdel Township and its residents ultimately recognized the potential to transform this underutilized building into an economic and cultural asset for generations to come.

“Though there have been challenges along the way, we continue to work diligently to ensure Bell Works New Jersey was a success, allowing us to fulfill our obligation to Holmdel Township, which will further benefit the community at large.”

President Ralph Zucker and Director of Operations Robert Feinberg presented a check to Mayor Greg Buontempo and Town Administrator Cherron Rountree in a ceremony that marked the culmination of the redevelopment process, which began in 2013.

“Ralph and his team at Somerset Development carried out a unique vision to turn a vast vacant space into this thriving metroburb,” Buontempo said in a statement. “The success of this project has continued to attract economic development to our town and, with this contribution, is directly benefiting the present and future residents of our community.”