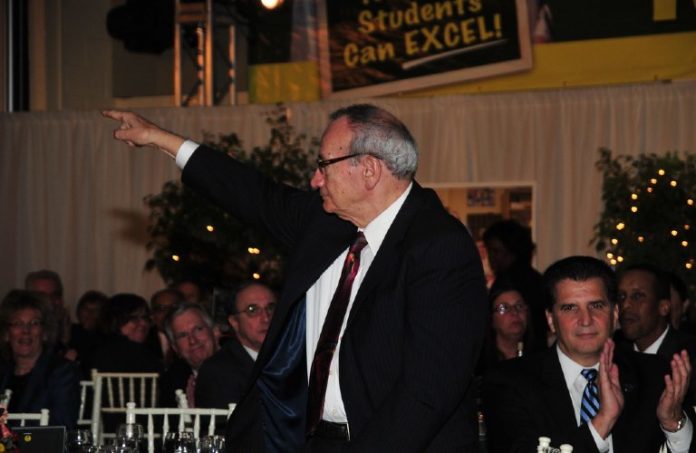 Tributes for Steve Adubato Sr. — an educator and political powerbroker who spent a lifetime giving all he had to Newark — have poured in all morning Friday since the announcement of his death at age 87.

Adubato began his professional career as a schoolteacher, but he became a quintessential “party boss” — someone who influenced local, county and state elections for decades.

But Adubato, known as “Big Steve,” preferred to be known as the man who founded the North Ward Center, a community-service organization, following the Newark riots in 1967. It became his passion. The center is now run by his daughter, Michele Adubato.

His impact was such that Gov. Phil Murphy, former Govs. Chris Christie and Jim McGreevey, and dozens of others were quick to offer accolades on a life well lived.

But trying to properly assess the impact of a man once known as “Newark’s second mayor” is not easy.

Kevin O’Toole, a longtime elected official who now serves as the chairman of the Port Authority of New York and New Jersey, may have summed it up best in a column he wrote for the New Jersey Globe three years ago. (It was reposted on the New Jersey Globe site Friday morning and is reprinted here with permission.)

O’Toole listed 20 lessons learned — lessons that any politician or public servant would be well-advised to follow:

20. Only fight the fights that you can win and those that are worth fighting for;

19. Hustle out every vote and never take one vote for granted;

18. When dealing with a group on a goal or mission — have frequent meetings with reportable deliverables;

16. Don’t give a job or instruction to someone that you haven’t or wouldn’t do yourself;

15. Don’t take only a gun to a knife fight — take a bazooka and always have a nuclear option;

14. When asked for a favor or appointment, don’t say no till the absolute last moment — that crossroad might never be reached, so why disappoint;

13. After a win or a loss, don’t gloat or agonize for more than a day — the next fight comes rather quickly;

12. Don’t have unreasonable expectations of people, most will disappoint you;

11. There is no sure thing in politics, but when making an important decision, don’t ever be emotional — be dispassionate like a surgeon;

10. Politics is an illusion and so-called political power is fleeting and temporary;

9. Politics is hard to define or explain — it is at best a real world, upside down and inside out;

8. When taking on an opponent — your first line of attack should be against his strong suit;

7. Love politics for the good that it can do for people;

6. Courage is the most rare element known to mankind;

5. Loyalty is the most prized attribute;

4. At the end of the line you are defined by the family you keep and the friends that you make;

3. Never show an opponent everything you have — it’ll show them your limitations;

2. Politics isn’t always pretty and sometimes nasty — but the ends always justify the means and whatever you can do today — do it today!

1. In the end, we are not Italian, Irish, Korean, Black, White, or Hispanic — we are all Americans First.

With that, a listing of some of the dozens of tributes:

“Few have had as large or as meaningful and longstanding an impact on the city of Newark and the lives of its residents as ‘Big Steve.’ In politics and civic life, he guided multiple generations of leaders. The North Ward Center remains a place where people of all ages and abilities from underserved backgrounds can find opportunities that would have otherwise escaped them. At a time when others were all too quick to write Newark off, Steve saw its potential and worked tirelessly to realize its promise. The rising Newark of today is a testament to his dedication, and its continued momentum will be among his many legacies.”

“I am sad today to have lost a dear friend in Steve Adubato Sr. He was a tireless fighter for quality education through his Robert Treat Academy charter school and no one cared more about Newark or its people. God bless Steve and his family. He was tough and he will be missed.”

“There are few persons I know who have left a more indelible mark of goodness upon the world. Comfortable with princes and paupers, Steve understood and respected the dignity of everyone he met. He was always civil, always a gentleman, yet he was a passionate advocate for the promise and potential of every child. Steve’s strength and power were derived from his faith, his family, his friends, and the conviction that every child is precious and valuable.”

“Our thoughts and prayers are with the Adubato family today as we learned of the passing of Steve Adubato Sr. A father, a husband, a mentor, an educator and a leader from the North Ward of Newark. The legacy of Big Steve will continue on.”

“Steve Adubato never stopped working to make his community a better place. It’s because of him that thousands of children in Newark have had access to quality preschool through the North Ward Center, which also offers education and family support programs. A titan of Essex County, Adubato shaped the political atmosphere in Newark for generations, helping to elect leaders with shared goals. He was a teacher, a mentor, a leader and a public servant. After 87 years of unparalleled dedication, he left this world better than he found it. His legacy will never be forgotten.”

“I have known Steve for well over 40 years. He was a mentor for me when I worked at the North Ward Center and when I entered government. Some people may not have liked Steve’s aggressive style, but he was a forward thinker and a tireless advocate for the city of Newark and its residents.

“Known as the city’s ‘Second Mayor,’ Steve was a major influence in calming relations and stabilizing the city after the riots and had the foresight to create the North Ward Center, which for generations has provided recreation and education programs to children, kept senior citizens engaged in their community and supported working class adults with workforce training to lift themselves into a better life. Those were his lifelong ambitions — to improve the city which he loved dearly and help all those who lived here. Today is a sad day because we have lost a visionary, a father, a leader and, most of all, a very dear friend.”

Brendan Gill, president of the Essex County board of commissioners:

“The communities of Newark and New Jersey have lost an iconic figure. I was extremely saddened to hear of the passing of Stephen Adubato Sr. Affectionately known as ‘Big Steve,’ he spent his life raising awareness on the importance of education through his work as a teacher, and his leadership on the Newark Teachers’ Union and the New Jersey Federation of Teachers.”

Adubato is survived by his wife, Fran, and three children: Michele, Theresa (a principal at the Robert Treat Academy) and Steve Jr. — an Emmy Award-winning television host and public speaking expert.

Steve Adubato Jr. honored his father’s legacy like no one else could, telling Insider NJ:

“My father was a special person. A one-of-a-kind leader who made a difference. So many knew him for being a political player in our state, but he wanted people to respect him more for how he used political influence to help the people of Newark … the city he cared for so much.

“My father was tough, brutally candid about what he believed, but cared so much for children and others in our urban communities that just needed a little help to make their lives better.

“New Jersey will never see another Steve Adubato Sr. He lived his life his way, on his terms. He left a very powerful impact in the lives of so many.

Here is a list of obituaries from various media outlets:

In a stunner, it’s too close to call

Murphy says N.J. holds no grudge, will do whatever it can...