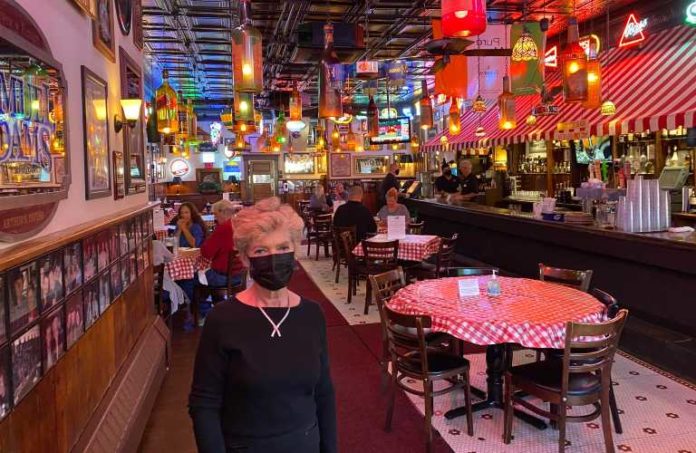 Alice McGreevy looks out at the walls of Arthur’s Tavern, the restaurant her family has owned for more than six decades.

They are walls covered with photos — many black and white — that portray so many of the good times and family gatherings that mark a local institution such as hers. They are a scrapbook of her own life.

She ponders the question:

“How long have I been working here?” she asks, and then answers. “For as long as I can remember.”

“My dad (the late Arthur McGreevy) was always calling me up, saying, ‘So and so is not here, get your butt over here,’” she said. “I had to learn how to do every job.”

McGreevy says she still is confident about the future of Arthur’s, despite the massive amount of revenue that’s been lost in the past six months. But she has plenty of concerns, too.

“Owning a family business, any business — not just a restaurant — is hard,” she said.

“We have to buy the food and the liquor and meet payroll,” she said. “People come in and have a good meal and a good time, but we’re the ones who are here until 1 in the morning — or 3 in the morning. This is hard work.”

Welcome to life in the restaurant industry — a key part of a hospitality sector that has been hit as hard as any sector of the economy.

Even at places such as Arthur’s, a steak restaurant the locals can savor from the moment they step off the train at the New Jersey Transit station across the street. It’s a restaurant many folks from out of town used to wait for hours to get a table on a weekend night.

Arthur’s reopened last week for the first time since it closed March 16. It did a steady stream of business as the reservations that were required — an effort to control crowds — were quickly gobbled up.

But it’s nowhere close to being able to break even.

McGreevy quickly rattles off the date Arthur’s closed down.

“March 16,” she said. “The day before St. Patrick’s Day, which always is our best and busiest day of the year.”

Arthur’s didn’t sell another beer or burger until last Wednesday.

It survived Gov. Phil Murphy’s restart-and-stop around Fourth of July weekend better than most. McGreevy said she ordered cleaning supplies, but not food.

“I had a gut feeling, just from being in the restaurant business my whole life,” she said. “I said to the manager, ‘Get all the cleaning products, but do not order food yet.’ I said, ‘I have a gut feeling he’s going to shut us down again.’ And, wouldn’t you know it, four days later, he shut everybody down.”

McGreevy passed on the opportunity to do outdoor dining, feeling the narrow sidewalk in front of the building would not be an ideal evening.

“We didn’t want people near all those car fumes,” she said.

And, even when the governor said indoor dining could resume on Labor Day weekend, McGreevy kept Arthur’s closed. She wanted to make sure the edict would hold. Besides, she knew the truth: 25% capacity is a losing proposition.

The governor’s recent aid program — one that could bring as much as $20,000 to restaurants — won’t change things either, McGreevy said.

“That’s not going to help anybody,” she said. “It really isn’t.”

Her father bought the business in 1957.

Arthur McGreevy, a longtime member and leader in restaurant associations, eventually grew his holdings to eight restaurants — including Arthur’s restaurants in two other locations.

Alice McGreevey said the others have been sold off.

Arthur’s in Morris Plains, the family’s first, always has been a family, she said.

McGreevy notes that none of the staff — some of whom have been working there for more than 40 years — has left. Though some are still not confident enough to come back.

She’ll wait for them all. The staff, she said, means everything to her and the business.

“The employees make the business,” she said. “I can’t do everything that they can. I can’t be a chef, a cook, a dishwasher, a bartender or wait on tables and host. I can’t do all that by myself. They make it work. They’re the heart of Arthur’s Tavern.

“Without them, I’m nothing. I’m an empty building.”

The good news: The McGreevy family owns the building, a two-story brick building with black shutters that anchors the center of the business district in Morris Plains. It has since it was called the Brook Tavern, McGreevy said.

McGreevy said it pains her to see stores closing along Speedwell Avenue, which serves as Main Street in Morris Plains. A dry cleaners just a few doors down — a longtime family business — has closed. As has the location for home health care, and even the Friendly’s.

McGreevy said she has seen other restaurants — longtime family businesses such as hers — go under, too.

“I’ve had so many friends that have had family businesses like ours, and they’re out of business,” she said. “They just couldn’t do it anymore.

Murphy has talked of raising the capacity limits as the weather gets colder.

Of course, recent upticks in cases around the country and in the state are calling that idea into question.

McGreevy said she can only sit and wait. She tries to remain hopeful.

“It’s been tough,” she said. “I waited to open because I didn’t want to have everything opened and then get shut down again.

“So, now, hopefully everybody’s going to wear their mask and, that way, we don’t have to shut down again.”

McGreevy, however, knows that’s not her call.

“It’s in the hands of the governor — and nobody knows what he’s going to decide,” she said. “He could shut everybody down again. We just don’t know.

“It’s one of those things where, every time you’re watching the TV and he comes on, it’s like, ‘Oh, no, I hope he’s not announcing that he’s closing restaurants again.’”

(Editor’s note: The author of this story, Tom Bergeron, has lived in Morris Plains for more than two decades and has been a regular diner at Arthur’s Tavern.)