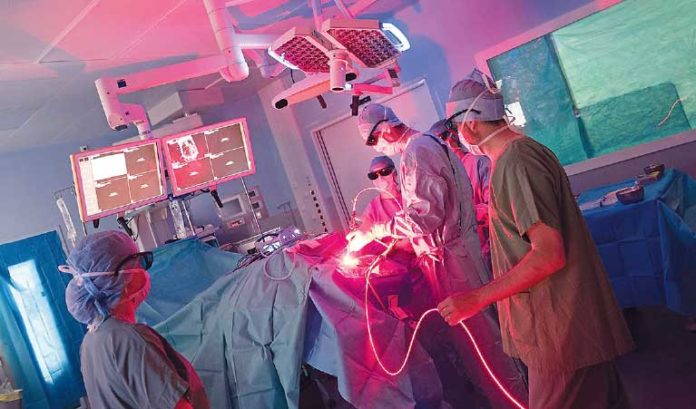 Suppose there is a therapy in development that could treat your internal solid tumors and stimulate your immune system to significantly cut the risk of your cancer returning?

What if this therapy, already in introductory clinical trials, spared your organs, so you could keep your tongue or your lung?

What if it did all this, but also used technology that wouldn’t damage your DNA?

Simphotek, a Newark-based biotech company, has developed a digital technology that guides surgeons as they use photodynamic therapy to remove solid tumors caused by advanced cancer.

Simphotek was recently selected as a “showcase company” at the National Cancer Institute’s Small Business Innovation Research virtual event, and as a “breakthrough company” at the international Redefining Early Stage Investments conference, both held earlier this fall. Additionally, Simphotek presented its technology recently as one of the Top 20 biotech companies in cancer therapy at an international meeting.

Simphotek uses computer hardware and software, including patent-pending algorithms, to create a treatment-planning system called “Dosie,” which works in real time inside the treatment room. The system depends on a photoreactive drug that binds with cancer cells. The software calculates how many cancer-killing ions a surgeon needs, the right amount of light intensity, how long the surgeon will need that light intensity and the right amount of the drug to use.

“In addition to doing these calculations, we have developed a combination of computer processors, so that the calculations that the surgeon needs are determined in a few seconds, rather than the hours that usually take place for this type of calculation,” Mary Potasek, co-founder and chief science officer, told NJTechWeekly.com.

“The program can calculate changes that the surgeon will need, using the input parameters, the light intensity, the light duration and so on, while a surgeon is actually operating,” Potasek said. “(It can tell the surgeon), ‘You need such-and-such light intensity, but you do not have enough and, in order to create enough cancer-killing ions, you need to increase that amount.’ And that calculation can be done in a few seconds. This is a complicated calculation that normally takes hours to process.

“We have a combination of various computer processors — the graphics processing unit and CPU — that we’ve added to make the cancer therapy reproducible, which has never been done before for this type of therapy. This is a critical unmet need to advance this cancer technology.

“We also give the surgeons a three-dimensional map of the tumor, so, they can look inside the tumor at various points and see which regions, down to a millimeter, are not receiving enough cytotoxic agents. And that region may have to be a treated longer or may have to have the light intensity increased or decreased.

“For patients, besides the promise of a longer life, the treatment would be highly sought after because it doesn’t have many negative side effects, such as impotence, nausea, organ removal or damage or DNA damage.”

Simphotek has raised about $7 million since 2016. Most of the money came from National Cancer Institute grants. The company collaborates with two world-leading medical schools — University of Pennsylvania and the Roswell Park Comprehensive Cancer Center — to form a multidisciplinary group of over 20 surgeons, doctors, engineers, biologists, radiation physicists and oncologists, all working together with one goal: to enable physicians to use photodynamic therapy to double or triple patient life expectancy when treating solid tumor cancers.

Currently, the company is proposing to raise $3.5 million to finalize intellectual property, hire key management and develop a working prototype. The company estimates that it will later have to raise about $20 million to complete development and do clinical trials, Potasek said.