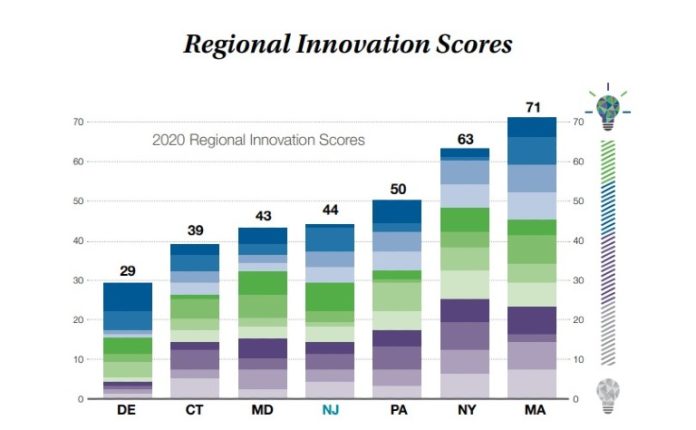 Gov. Phil Murphy has made creating an innovative economy one of his top priorities since taking office. Three years after he was elected, you can say he’s halfway there … in the Northeast.

The New Jersey Business & Industry Association’s updated 2020 Indicators of Innovation report, which bills itself as an examination of how the state’s innovation economy compares to other states in the region, shows New Jersey’s overall innovation score remains stuck in the middle of the pack.

The study, released Tuesday, analyzed data for 12 indicators in three major areas that are key to a robust innovation ecosystem — capital, talent and business — and makes a series of recommendations to improve New Jersey’s competitiveness in building a more robust innovation economy.

Nicole Sandelier, the director of economic policy research at NJBIA, said the state isn’t taking full advantage of its potential.

“New Jersey has the capacity to be an innovation leader, but isn’t capitalizing on its substantial assets and addressing existing obstacles,” she said. “Government, academia and business can revitalize New Jersey’s innovation ecosystem by working together to focus on the areas where New Jersey lags significantly behind its regional competitors.”

Sandelier said the report found New Jersey’s innovation ecosystem is challenged by high taxes; the loss of too many first-time New Jersey college students to other states; and significantly less venture capital investment and federal research and development awards than some of its competitor states.

Massachusetts and New York remain the regional leaders in innovation, just as they were in NJBIA’s study last year. In the 2020 study, New Jersey edged out Maryland in the seven-state comparison by 1 point, for an overall No. 4 ranking, which dropped Maryland to No. 5.

Sandelier said some data sources used to calculate indicator scores are new or modified from those used in the NJBIA report released in 2019. Therefore, while a state’s individual score in each of the 12 indicators should not be directly compared to its scores in that category in the prior year, the scores are useful for comparing how the states stack up against one another.

The full report and graphics can be found here.

Key takeaways from the latest report include:

Recommendations: New Jersey can be more competitive by partnering with venture capital funds to invest in early-stage companies; increasing the R&D tax credit to incentivize R&D spending; and increasing funding for the state’s Commission on Science, Technology & Innovation so that it can provide direct grants to small business, implement new programs and continue to help small businesses with the federal SBIR/STTR grant process.

Why the fate – and future – of nuclear power in...