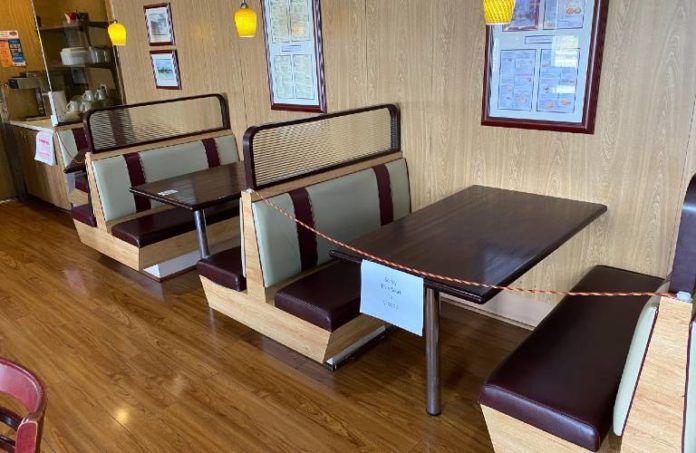 Gov. Phil Murphy is going back and forth regarding his desire to increase capacity for indoor dining. Last week, he indicated it was likely. This week — with COVID-19 cases on the rise — he said it’s not so likely.

But, there’s a catch: Just raising capacity is not the cure-all for the restaurant business. Here’s why.

Increasing capacity is of no value if tables still need to be at least 6 feet apart. That social distancing requirement essentially makes it impossible to add tables, regardless of the maximum capacity allowed.

So said Peter Sedereas, the co-owner and operator of the Townsquare Diner in Wharton. He has done the math.

“I think 95% of restaurants are in the same boat.”

Restaurant floor plans are so tight traditionally that the 6-foot requirement takes close to 75% of the seats out of play, Sedereas said.

The capacity increase has to come with a decrease of some of the restrictions, he said. And Sedereas feels the industry is well equipped to handle such a change.

“We could keep people safe without the 6-foot distancing,” he said. “We could increase the size of the dividers between the booths. Right now, I have every other booth closed. Without the distancing, I could open up everyone back to back — using Plexiglas. That would be a big difference.”

As for health concerns? Sedereas said what industry leaders have been saying since the pandemic took hold: Cleanliness always has been a top concern for the industry. It has to be.

“Cleaning and sanitizing is what we do,” he said. “It’s what we’ve always done. People get up from a table, we know how to clean it properly for the next customer. We have to.”

Sedereas, who is one of the leaders of a diner coalition group, said the group will take this up with the administration during a scheduled meeting Thursday.

He said he is hopeful for a good outcome.

“We’ve gotten a good response from the Governor’s Office,” he said. “They have been willing to listen and work with us.”

Sedereas and others are going to need it.

Marilou Halvorsen, the head of the New Jersey Restaurant & Hospitality Association, said during the recent DoorDash Main Street Strong Restaurant Conference that restaurants are at a crossroads. Restaurants, she said, are going to have to decide if they want to invest in their indoor spaces or their outdoor spaces.

It’s something Sedereas said he wrestles with as the weather turns.

He has looked at both options. Outside, he said, will be tough for three reasons:

Despite these challenges, Sedereas said he remains optimistic about the industry. He said his takeout business has been booming since the pandemic started. He said indoor dining has been a hit since it returned, too.

“Business has been good,” he said. “Everyone is eager to go out. Everybody wants to get back to their lives. We have to learn to live again.”

Murphy, speaking at his COVID-19 briefing Monday, said trying to find a solution for restaurants is difficult — something made even harder with the recent rise in cases.

“I would be lying to you if I didn’t say … these numbers are sobering,” he said. “We are war-gaming a whole lot of potential steps that we can take, whether it’s indoor or outdoor or both dining, to try and relieve some of this burden without adding to our already-rising numbers.”

The good news: There has been no evidence tying indoor dining to the rise. That being said, Murphy noted there are still some concerns.

“We not only have to help our restaurants, but we’ve got to be consistent in the plea for responsibility among citizenry,” he said. “We don’t want to cross purposes on those.”

Sedereas said there is one thing in the industry’s favor.

“People have to eat,” he said. “And they’re tired of cooking. We do a lot of delivery with third-party apps and that’s gone through the roof, since March, and it has stayed consistent.”

But it’s not enough, Sedereas said.

“As we head into winter, less and less people are sitting outside, because it’s getting colder,” he said. “We’re at a crossroads. We have to get to 50% sooner rather than later.”

And there has to be a lessening of some of the social distancing, too, Sedereas said.

“We have to have it to make this work,” he said.