Home Politics Murphy offers details on how he is quarantining, its impact on his...
Facebook
Twitter
Linkedin 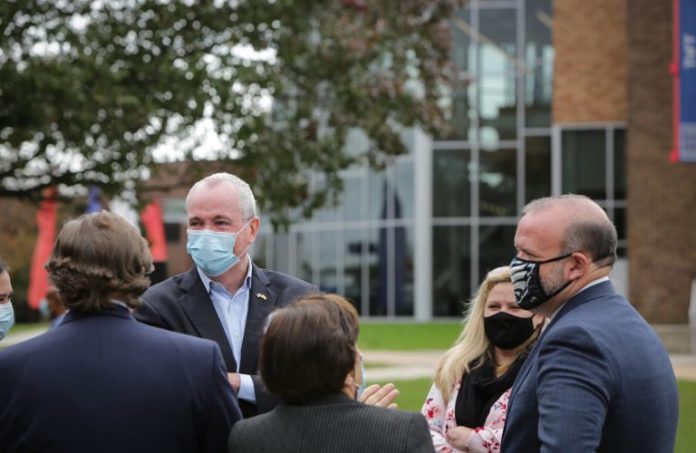 Gov. Phil Murphy, who is self-quarantining at least through the weekend, explained how the situation is impacting himself and his family, and the circumstances that led to the decision, during a radio interview Thursday morning.

Murphy, who has tested negative for COVID twice since his potential exposure, told WINS-AM 1010 host Brigitte Quinn that he’s feeling great. He also discussed the Saturday night outing that led to his quarantine.

Here’s a transcript of some of that appearance:

Brigitte Quinn: Governor, can you tell us exactly what you’re doing during the quarantine?

Phil Murphy: Brigitte, this is kind of a sign of the time. I looked at my schedule today and my likely schedule tomorrow and over the weekend. I’m largely doing what I otherwise would have been doing. It’s already become such a crazy, virtual world. Our entire front office is working from home right now, we are all virtual, we’re continuing to run the government and do everything we can largely do. I won’t do a live press conference today, but I’ll be there at that press conference virtually. So, it’s in the world we live in, the change in terms of running government is not as profound as it might have otherwise been.

BQ:  Are your kids around? Do you have to wear a mask around them?

PM: We have got two of our four kids here. We, frankly, don’t go near each other. We have a lot of windows open, we eat outside whenever we can, and we wear masks if we are in close contact.

PM: Yes, absolutely. I was tested Monday just as a normal course of business. My wife and I both tested again (Wednesday) when we heard about our colleague who was tested positive. Again, we tested negative, as I had on Monday. I’ll get tested again likely on Saturday, and likely again on Monday morning, assuming that the test on Saturday is also negative, before I get back seeing people again.

BQ: So this event, an outdoor event, was last Saturday. Governor, you have to really wait the two weeks to be in quarantine before you know for sure that you’re out of the woods?

PM: So, at the moment, the CDC — and we follow this strictly, as you could imagine — says if you’re within 6 feet for 15 minutes or more or are in close contact, that’s a sort of red line. I was not really right up against this person. It was, at most, 15 minutes and we were outdoors. Having said all that, we’re taking the steps we are taking out of an abundance of caution and we reserve the right, by the way, based on tests and other developments to extend this as we think we need to.

PM: We, ourselves, took them off. Obviously, you can’t eat or drink through a mask, so, honestly, I have to say when people were moving around, and that’s when you really want to make sure you’re not sitting with your own little bubble, but you’re moving around and you’re intermingling with folks who are not part of your family or close friends. Folks were wearing masks, at least to the best of my recollection. But, at the table, you’re having a drink, you’re eating something, by definition, you’re taking your mask off.

BQ: Other people at the event, I didn’t see a number. Do you have a number of how many people are going to have to get tested because of the event?

PM: Well, it wasn’t an event, it was actually just a social engagement with a handful of our close friends and colleagues, so it’s everybody that was at the table that we were at. … I think everyone has been tested at this point, and I believe, to the best of my knowledge, everybody else, thank God, has been negative.

BQ: Roughly how many people are we talking?

PM: There were probably half a dozen of us.

BQ: OK, so a fairly small event. Also, you mentioned that your office is doing the at-home routine right now. Governor, is that because of your potential exposure? Are there more people among your staff who were not at the gathering who need to get tested?

PM: Yeah, they have all either gotten tested or will be tested by tomorrow. And it’s not really exposure to me, it’s exposure to, now, actually, two staff members who have tested positive. Both, by the way, are doing fine, thank God.

It is exposure to them, that has led us both (to have) everybody work from home, as well as aggressively test our team, and, in some cases, other staff members that they had closer, more prolonged contact with, with our colleagues. They, in fact, will be quarantining for that 14 days.

Sherrill bill would allow workers to keep $180 a week in...