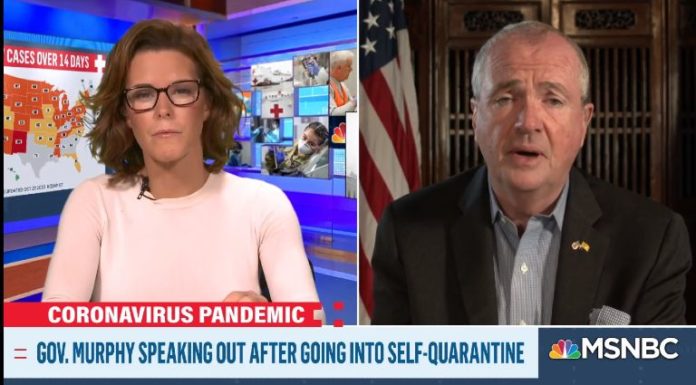 Gov. Phil Murphy said he thinks New Jersey can handle COVID-19 outbreaks by location, that he thinks the state is better prepared for a second wave and that he doesn’t want to shut the state down again. But there are no guarantees.

Murphy, speaking Thursday morning on “MSNBC Live with Stephanie Ruhle,” was pressed on issues involving the business community, which has been devasted by rules and regulations related to COVID-19.

“Obviously, health concerns are paramount, but there’s also a ton of economic pain here,” Rhule, a New Jersey resident, said. “This is a state of small businesses. How do you factor in the livelihoods of people working in those businesses? Many of whom who are saying, ‘Hold on, we’re going to get shut down again, we still haven’t even opened?’”

“I would say to them that I hope, with all my heart, we don’t shut down again — I want to be unequivocal about that,” Murphy said. “It has to be on the table as an option, but we’re going to do everything we can to not do that.

“I believe we’ve responsibly, step by step, open our state back up again. We still have limited capacities, admittedly, on things like indoor dining, on gyms and on indoor entertainment, for sure. But we have come a long way since we started to reopen in May. And I hope we not only stay that way, but the numbers get better, sooner than later, and we’re able to continue to open up.”

Murphy said he still feels the state can handle any COVID-19 outbreaks by location, rather than with a statewide executive order.

“I still think this is much more likely a scalpel than a hammer, although things like capacities, indoors or outdoors, are something that we constantly think about,” he said.

Murphy also acknowledged that the state is going through COVID fatigue.

“There is enormous fatigue right now,” he said. “And who could blame folks?”

The problem, he said, is that the state still is depending on residents to do the right thing.

“It looks like most of the challenges of late are not in what the experts call the public square,” he said. “It is much more often now in private homes, beyond your ability to regulate, or, more importantly, enforce compliance.

“As long as that’s the case, we have to appeal to people to remember their personal responsibility. No state has done a better job at that the New Jersey, but the clock is ticking.”

“The problem is, this virus dictates the terms, not us,” he said. “And we have to plead for continued personal responsibility, even when you think (you can) let your hair down at home.”

Murphy said New Jerseyans can only take comfort in one thing: They have been through this once.

“The only solace — and I say only solace, because we’ve paid an enormous toll here — is that we enter a second wave or a surge in very good condition,” he said. “So, God willing, the uptick that we have to live through as we are doing right now is a lot less painful … than what we had earlier in the spring.”

Booker lags leading Dems in early 2020 poll from Monmouth, though...