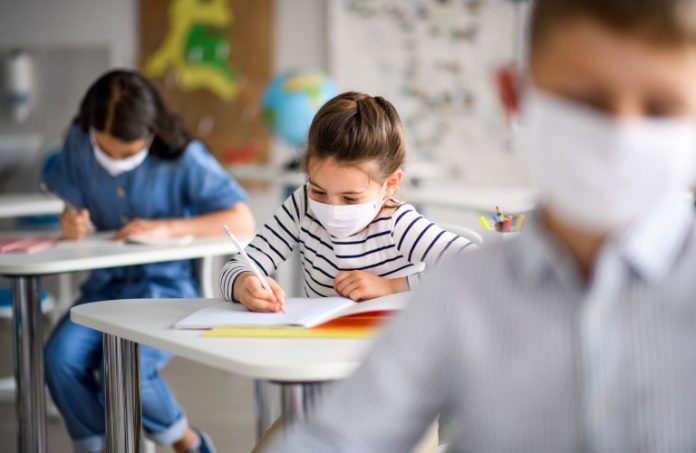 COVID cases in schools across New Jersey continue to be a major area of concern among residents.

That was clear Thursday afternoon by watching the comments section on Facebook Live after Gov. Phil Murphy’s COVID-19 briefing became a virtual event due to the governor self-quarantining.

The concern may not be warranted … statistically.

Cape May, Camden, Bergen, and Ocean counties are tied for the most confirmed outbreaks with three apiece. Murphy again cautioned against panic, as these numbers are exactly in line with what his office prepared for.

“Every case is important; we take every one of them deadly seriously,” Murphy said. “But we remain confident that we have the protocols in place to protect the health and safeties of our schools and our educational communities.”

Murphy’s media briefing looked a little bit different, as state officials who usually join him side-by-side on stage instead were by his side in a Zoom call being broadcast on Facebook Live. The unusual setup was due to the governor’s self-imposed quarantine after being exposed to a senior staffer who recently tested positive for COVID-19.

“Out of an abundance of caution, Tammy and I are observing a self-quarantine period,” Murphy said. “(Wednesday), right after hearing (about the staffer’s positive result), Tammy and I were both tested and I’m relieved to say we both tested negative.”

Murphy reportedly was exposed when attending a social event Saturday night at Pilsener Haus & Biergarten in Hoboken. He attended with first lady Tammy Murphy and his communications director, Mahen Gunaratna, and his wife.

Toward the end of the gathering, the group was joined by deputy chief of staff Mike Delamater, who tested positive for COVID-19 on Wednesday. The governor and the first lady plan to self-quarantine in their home at least through the end of the weekend.

Senior adviser Dan Bryan has also tested positive. Despite rising cases within his own administration, Murphy believes that his staffers’ recent diagnoses send an important message about this virus.

“I think this is proof, if nothing else, that no one is immune from the virus,” he said. “We all must take this pandemic with the utmost seriousness. We did not have what the CDC would call a ‘meaningful, direct contact,’ but, out of an abundance of caution, we’re taking ourselves off the field … we have to remain vigilant. Not just some of the time. All the time.”

The state again passed the 1,000 mark for new cases Thursday, with 1,182 reported positive cases. The cumulative statewide total is now at 224,385.

Several counties continue to be areas of concern, with positive results rising at a worrying rate. Essex County reported the highest total, with 196 cases, while Bergen, Hudson and Union all have reported over 100.

A sobering high of 18 deaths have now been confirmed to be from COVID-related complications, 15 of which occurred over the past week. The total across New Jersey is 14,474, with probable deaths at 1,789. There were 13 deaths reported in hospitals across the state yesterday, but those cases are awaiting confirmation.

Murphy on the killing of brothers Gustavo Perez (age 16) and Johnny Perez (age 8) on Tuesday in Trenton:

“We stand in full support of the Trenton police in their investigation into this despicable and cowardly shooting and encourage anyone with information to step forward. I was back and forth this morning with Mayor Reed Gusciora. And, by the way, we remain focused and must remain focused on ending the scourge of gun violence. Not just in Trenton, but in all of our communities.”

Cambrex branches out with $425M deal for Halo Pharma

Pullin discusses lessons he learned in his first year as Virtua...