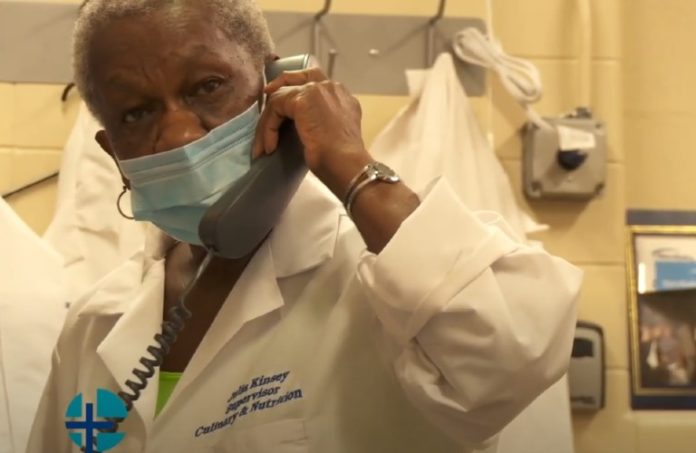 Her family, friends and coworkers for generations at Saint Peter’s University Hospital gently tried to tell Julia Kinsey that she should take some time off — a temporary leave of absence, they said.

They warned Kinsey that COVID-19 was something to be taken seriously. Especially at her age. Kinsey, after all, is 80.

Kinsey wouldn’t think of it.

It was during these times of crisis that she felt even more connected to the patients she makes sure get a good meal in their time of need. She said she never has felt so connected to her job. A job she has had for more than 60 years.

So, even during the worst pandemic of her lifetime, Kinsey would not think of taking even an extra day off.

Kinsey believes it’s the little things that can make a difference in someone’s day. Her philosophy is to treat others like she would treat her own family. That commitment has resulted in many of her co-workers seeing her as more than a supervisor — as a mentor, friend and even family. It all blends together.

Kinsey, a supervisor of food and nutrition services, described it that way during a video to honor her 60 years at New Brunswick-based Saint Peter’s.

“I have a three-part life,” she said. “I have my family. I have my church and my church family. And I have Saint Peter’s. That’s my life.”

(Story continues after the video.)

ROI-NJ wanted to do something special to honor the amazing staffers who went above and beyond at each of the state’s hospitals during the first wave of COVID-19. We call them unsung heroes.

You can read about them all, by hospital, here (A-M) and here (N-Z), and read all of our ROI Influencers: Health Care honorees here.

We received a number of amazing anecdotes, but none as moving as the efforts of Kinsey, who has been working at Saint Peter’s since she was 19 years old.

Kinsey is an inspiration to those around her, said Les Hirsch, the CEO of Saint Peter’s Healthcare System.

“In today’s day and age of changing jobs and changing careers, 60 years of service at one place is extremely rare; and most definitely an exceptional achievement,” Hirsch said. “Julia’s story of longevity is a testament to her endurance, strength and loyalty. She truly lives Saint Peter’s Catholic mission, and we are blessed to have her as a member of our Saint Peter’s family.

“Julia Kinsey is truly inspiring and serves as a role model to us all.”

Debbie Signorelli, the director of culinary and nutrition services and Kinsey’s co-worker for the past 18 years, agreed.

“Julia is really selfless,” she said. “She completely is about getting the job done. She will do whatever it takes to make sure that things are always running smoothly.”

If that means doing the dishes — or creating a meal long after the cooks have left — Kinsey will jump to the task, Signorelli said.

Kinsey said it’s the only way she knows how to be — a reflection of a value system she has had throughout her life.

“I guess it comes from my background, from my raising,” she said. “We were taught that you had to work for what you earned. And it’s just something that I always believed in. My theory is, when I come to work, I come to give a day’s work for a day’s pay.”

Kinsey also always puts others before herself.

“For my employees, I try to instill in them that they are here not for themselves, but to serve the patients,” she said. “That comes first.”

The message has resonated.

Evelyn Sanchez has been a co-worker for 40 years, but she said she always looks up to Kinsey with admiration.

“She’s the one that I would love to be like,” she said. “She loves work, and she loves people. I guess that’s why she’s been here for 60 years. You have to care and have a passion about what you do in order to do what she does.”

Kecia Stephenson said she started at Saint Peter’s more than 30 years ago, right after high school. As a working mother with a small child, Stephenson said all of her new co-workers looked after her — but none like Kinsey, who eventually became her godmother.

“She just took me in,” Stephenson said. “And I needed that.”

Saint Peter’s officials said Kinsey was humbled by the recognition from Saint Peter’s, but felt the more than 100 people in food services should be recognized, too.

“We share a sense of compassionate care and dedication to those we serve,” she said. “It’s this comradery and commitment that is at the heart of Saint Peter’s.”

And Kinsey is at the center of it all.

Stephenson said her spirit has touched every co-worker for 60 years.

“She’ll never be forgotten,” she said.

“I love my family. I love my church and my church family. And I love Saint Peter’s,” she said.