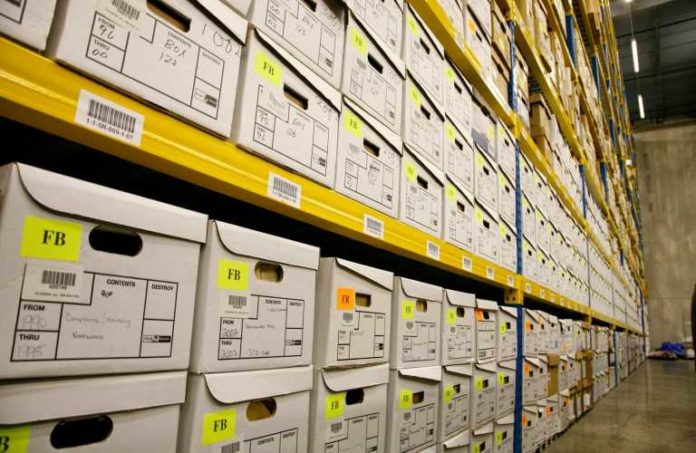 There’s a place in New Jersey … where the Muppets and mortgages mingle.

Besides setting the stage for the most joyless children’s story ever, this is the way one might begin to describe the many odd juxtapositions waiting within the windowless, concrete walls of FileBank‘s massive archive center in Oakland.

It has always been a mix of finance and fun inside the company’s storage centers. The first documents Greg Copeland stowed away for a client were his own accountants’, but he was also storing costumes for New York’s Metropolitan Opera in an old six-story building in Paterson near St. Joseph’s University Medical Center.

A state-of-the-art storage facility in Oakland now holds towers of documents for financial institutions and public agencies, while also housing costumes for the Metropolitan Opera, New York City Ballet and around 69,000 Muppets items and other puppets from creator Jim Henson’s projects.

“We’re very compatible with the region’s arts,” Copeland said. “They seem to like the way we think and behave.”

Copeland started the business in 1987, not at all knowing he’d be tasked with the safekeeping of valuables for the region’s major opera, ballet and theaters. The 82-year-old businessman — who still talks about his venture as a high-spirited entrepreneur would — said he has a passion for protecting and preserving.

“And, I think deeper than that, is my educational foundation,” he said. “I went to a military school, which I guess taught me the concept of neatness and organization, as well as punctuality. And, in undergrad, I majored in design and art history, so I have an appreciation for things of beauty and consequence.”

Over 30-plus years, FileBank has tried to improve security and capacity for a list of items that runs the gamut: blueprints, wine, automobiles and fine art (including pieces dating back to the Renaissance).

That has required some hefty investments, Copeland said, including more than half a million dollars on having Bergen County’s first building with an underground water-flow system to protect against flooding damage.

Part of the company’s investments over the years has been taking a company that once tracked all its inventory on a single Dell computer and transforming it into a sophisticated data operation.

“We now have digital images that match up with the items in storage,” he said. “Say our client wants to know what earrings we have for Miss Piggy to go to the Academy Awards, they can match visual pictures with what they’re looking for.”

Especially during the pandemic, companies have been looking to turn their physical files into digital assets. FileBank recently signed on several local education agencies that had a sudden need for digitized record-keeping during virtual learning.

Unlike some of its competitors, FileBank still tries to keep the digital and physical documents married together in one system. As Copeland said, you never know when a physical document might become valuable — like Frank Sinatra’s Hoboken school records, which have been looked for, but not found, in FileBank’s vault.

Both the physical and digital versions of documents can hold a fiduciary value for the banking industry, given the sector’s complex compliance needs.

“We’ve had banking customers since the beginning, but one of the issues with banking clients is some of their documents have fiduciary, tangible value,” he said. “They’re very concerned about paperwork covering something like a million-dollar mortgage, and I don’t blame them.”

With all the constantly evolving compliance needs of banks, Copeland said his company hasn’t been as focused on going after the banking sector as of late. It had Valley National Bank as a client for almost 20 years and it still maintains a partnership with Columbia Bank, managing every file related to the bank’s active and inactive loans.

As it would happen, Copeland himself has never taken a business loan — outside of the $5,000 loan he took from his father to start the enterprise three decades ago.

But the self-financed business is now up against some well-financed competition. Copeland said he’s facing a lot of pressure from Silicon Valley companies, such as investor darling Dropbox.

“Dropbox and FileBank are essentially doing the same thing,” he said. “In essence, they ran at a loss until they built up the kind of user mobility that gave them size and scale. I could never have done that without venture capital or partnerships. I was content to build this business piece by piece like a Lego set.”

Copeland seemed willing to entertain the idea himself … that perhaps FileBank could have been the major name in storage today with a different approach.

“Who knows,” he said. “I’ve done nicely, so I’m not going to complain. I don’t daydream for what someone else has accomplished. I just want to continue to do a good job at what we do.”