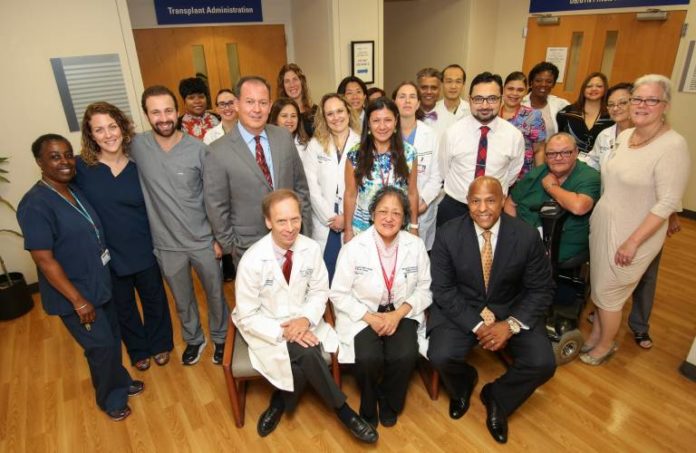 Dr. Mark Zucker, the director of cardiothoracic transplantation at Newark Beth Israel Medical Center who helped bring national recognition and praise for the program, but later came under scrutiny, is leaving the medical center after 31 years.

“Dr. Zucker and the leadership of NBIMC and RWJBarnabas Health have mutually agreed that this is an appropriate time for a formal leadership transition in the medical center’s transplant program,” Newark Beth Israel said in a statement Friday.

Zucker said he will be leaving to pursue new opportunities in the practice of medicine, cardiology and advanced heart failure.

“Newark Beth Israel Medical Center has always had a reputation for providing high-quality care, state-of-the-art care, and I am truly proud to have worked there for more than three decades, served the community with honor and contributed substantially to that reputation,” Zucker said. “It is my hope that the program to which I dedicated my entire professional career will remain a destination for health care for years to come.”

Barry Ostrowsky, the CEO of RWJBarnabas Health, said it is difficult to capture all that Zucker has meant to Newark Beth and the transplant program.

“Dr. Zucker’s commitment to Newark Beth Israel has been unwavering for 30 years,” Ostrowsky said. “His willingness to tackle incredibly complex cases played a pivotal role in establishing Newark Beth Israel Medical Center as an internationally recognized destination for patients with advanced heart failure in need of transplantation and investigational therapies.

“I consider Mark a friend and colleague, and his efforts as a clinician will always be remembered and appreciated.  Over the past 30 years, the program performed more than 1,000 transplants and attracted patients from throughout the United States. Mark leaves the program knowing that he has made a difference in the lives of thousands of families.”

In 2019, Zucker was the subject of a ProPublica expose in which a series of accusations were leveled against him and against the NBIMC Heart Transplant Program, suggesting the program may have kept transplant patients alive longer than medically appropriate to improve statistical survival rates.

Shortly after publication of the story, the Centers for Medicare and Medicaid Services and the New Jersey Department of Health conducted reviews, which have since been closed without an implication of wrongdoing. Zucker had been placed on administrative leave.

Newark Beth will now look for a new leader of a program that has brought it national acclaim under Zucker.

In 1989, Victor Parsonnet, the former chair of the Department of Surgery at NBIMC, recruited Zucker, a transplant/heart failure cardiologist from Loyola University in Chicago, to help develop and expand the institution’s newly created heart transplant program.

From 2009 to 2016, the transplant program at NBIMC was consistently ranked among the Top 10 in the nation, by volume.

As the program grew, Zucker traveled across both the country and the world to give lectures on NBIMC’s programs and the positive impact they were having on the local Newark-area community. These lectures helped the program gain newfound fame and acclamation.

Although Zucker’s foresight and vision benefited the patients, institution and transplant profession tremendously, he said he never lost sight of the program’s primary focus, providing for the community Newark Beth serves. In fact, nearly half of all transplants between June 2018 and June 2019 were done for minority community members, several percentage points above the national average.

In 2004, Zucker’s commitment to the inner-city community was recognized when he was awarded the Samuel Koontz Award, which generally is given to African American health care providers.

Parsonnet, a member of the New Jersey Hall of Fame, was filled with praise for Zucker.

“When my grandfathers founded Newark Beth Israel Medical Center, they envisioned a place that was dedicated to helping the local community; that spent every day working on how to improve the health of those who needed help the most,” he said.

“No one better exemplifies that commitment than Mark Zucker. His innovation, his work ethic and his time promoting Newark Beth Israel to others has been crucial in both building the reputation of the medical center and in the quality care that patients there receive. Mark is one of the best and I wish him well on his future endeavors.”

Many of Zucker’s colleagues have come to his defense. After he was placed on administrative leave, he drew huge support from his colleagues, with more than 1,000 signing a statement in support of him within 24 hours of a petition posting online.

On Friday, he was praised inside and out of the hospital.

“Most of these technologies were driven on a national level by cardiothoracic surgeons, who have praised Mark’s unique talent, foresight and leadership role in adopting these modalities into his field,” she said.

“In the 22-plus years I have known and worked with Mark Zucker, I have seen how strong his relationships are with his patients,” Roth said. “I have seen his exceptional care for patients from disadvantaged and medically indigent populations, especially those of Newark. I consider Mark an outstanding cardiologist and patient advocate.”